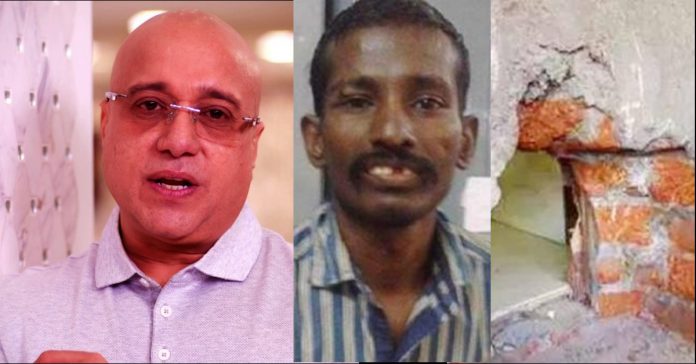 Owner of Lalitha Jewellery Kiran Kumar has met main accused and the leader of the recent robbery Murugan while he was in Police custody. To our shock, he even thanked the thief. Lalitha Jewellery, a three-storeyed building near Chathiram bus Stand, was burgled after two-masked men entered the premises by drilling a hole in its wall. Chairman Kiran Kumar said jewellery worth Rs 13 crore was stolen from the store.

As the main accused Murugan and Suresh were interrogated by police officers, the culprits reportedly revealed their connections with the film industry of Tamil and Telugu. Earlier, a man who was identified as Manikandan was taken into custody at Thiruvarur. His accomplice Suresh managed to escape and surrendered on Thursday in Trichy Chengam court. The police have recovered 5kg of gold from Manikandan. On checking the gold bar code, it was confirmed by the police that the recovered gold was part of the loot that was stolen from Lalitha Jewellers.

In the process of producing a movie, they met a leading South Indian actress who is a celebrity kid. According to Indiaglitz, the actress acted in films with Vijay and Siva karthikeyan who are considered as two of the leading heroes in Tamil cinema.

During their meet, Kiran Kumar asked Murugan why he chose Trichy branch to rob as he has many branches across Tamilnadu. He also asked how did he know where to drill in order to get to the place where Jewels are placed.

To his question Murugan reportedly said that he visited with his wife to the store for more than 10 times before robbing. “She will be visiting the store and I concentrated in where to put hole to get the jewels. This is how we got to get a plan to rob” said Murugan to Kiran Kumar.

After listening to Murugan, Kiran thanked him before leaving which made Murugan to ask why he is thanking him. To that Kiran said that he was in a big confusion while thinking about the whole robbery. “I didn’t care for the jewels which were robbed because I have insurance to claim. Despite of the heavy security, you had the guts to enter my shop to rob. I thought that there was someone in my shop who is working for me helped you to plot the plan. This caused my confusion and now I have no doubts on my workers” said Kiran according to reports.

A case was registered on Murugan and the other two accused under IPC section 457 and 380. What do you think on this gesture of Kiran Kumar ?/ comment your views below !!

Previous articlePriya Anand Got Irritated On Seeing This Tweet About Vikram & Dhruv !!
Next articleFollower Asked “Adhithya Varmaa” Heroine To Gain Weight !! Check How She Shut Him Down !!