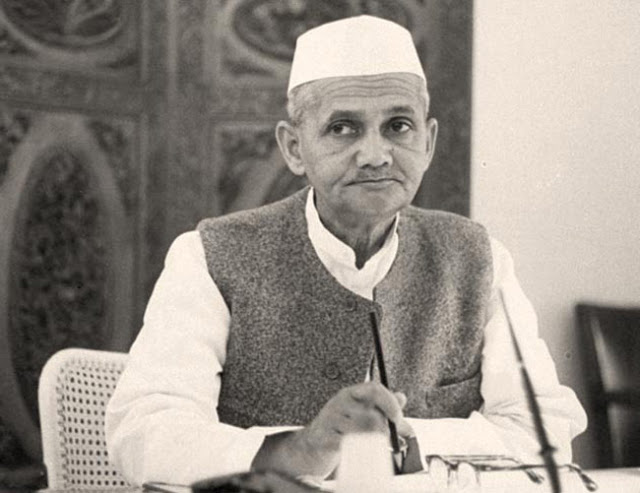 Oct 2nd holds a special place in Indian History. Two great leaders were born on this day. One is Mahatma Gandhi and the other being Lal Bahadur Shastri, the 2nd Prime Minister of India.  But before he became the Prime Minister, Shastri was a staunch activist and followed Gandhi ji in various movements. He was even jailed on multiple occasions for his participation in the freedom movement.

1. Lal
Bahadur Shastri was born in Ramnagar in Varanasi in a Kayastha family, but as
Shastriji didn’t believe in caste discrimination, dropped his tittle. Later,
when he graduated at Kashi Vidyapeeth, he was given the title of Shashtri
(scholar).
2. He got married to the
Lalitha Devi of Mirzapur on 16th of May in 1928 and took a charkha and few
yards of Khadi as a marriage gift.

3. Lal Bahadur Shastri went to jail as early as when he was 17-years-old. Jailed for his participation in non-cooperation movement, Shastri was later let-off as he was only 17 (minor) then

4. In 1930, during the Civil Disobedience Movement Lal Bahadur Shastri was again jailed for his participation in it. This time Shastri served a jail-term of two and half years. Shastri learned about western philosophers and social reformers during his jail-term.

7. When Shastri became the PM of India in 1965, the country was facing food shortage. Pakistan attacked India and Indo Pak war broke out.He rallied the ccountry through his famous call “Jai Jawan, Jai Kisan”.
8. As a transport minister, post the independance, Sashtri facilitated the appointment of women conductors in transport services.

9. In 1964, Shastri signed an
accord with the Sri Lankan Prime minister Sirimavo Bandaranaike regarding the status of Indian Tamils in the then Ceylon. This agreement is also known as the Sirima-Shastri Pact or the Bandaranaike-Shastri pact.
Under
the terms of this agreement, 600,000 Indian Tamils were to be repatriated,
while 375,000 were to be granted Sri Lankan citizenship. This settlement was to
be done by 31 October 1981. However, after Shastri’s death, by 1981, India had
taken only 300,000 Tamils as repatriates, while Sri Lanka had granted
citizenship to only 185,000 citizens (plus another 62,000 born after 1964).
Later, India declined to consider any further applications for citizenship,
stating that the 1964 agreement had lapsed.
10. Shastri was known for his honesty and humility throughout his life. He was the first person to be posthumously awarded the Bharat Ratna, and a memorial “Vijay Ghat” was built for him in Delhi.
11. There are many conspiracy theories surrounding Shashtri’s death after Tashkent agreement in then USSR. Many still claim that it was not a cardiac arrest and that he was poisoned. He is the only PM of India to have died in a foreign country.