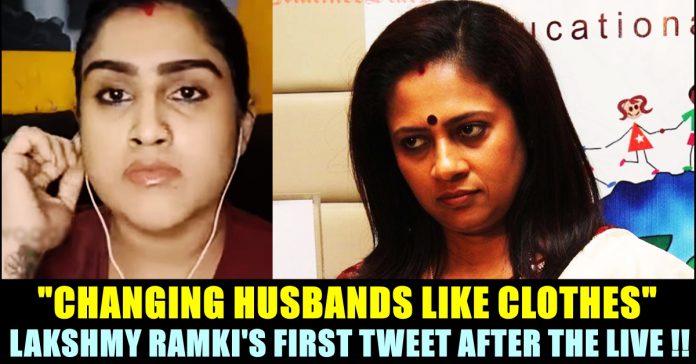 After the shocking interaction in Behindwoods youtube channel with Vanitha Vijayakumar, Lakshmy Ramakrishnan opened for the first time through her official twitter account in which she has 1 lakh 24 thousand followers. It all started when Lakshmy Ramkrishnan appeared in a video upon Elizabeth Helen’s request and raised voice for the mother of two children.

Lakshmy Ramakrishnan who thanked those who supported her in this issue, asked Vanitha whether she knows the meaning of “Marriage”, “Commitment” and “character. She also said that she is wedded to her husband Dr. Ramakrishnan for 36 years and alleged that Vanitha can’t understand it by saying she is changing husbands like clothes. “I sympathise with you:)” she wrote in her tweet.

Do you understand the meaning, even spelling of 'Marriage', 'Commitment & 'character'? You dare speak about Dr Ramakrishnan, who is my legally wedded husband for 36 years? People who change, no 'Keep' husbands & change them like clothes won't understand. I sympathise with you:) https://t.co/hvxIAMJ0QZ

Do you know what it takes to live as an example to kids? What have you taught your kids about husband and wife relationship? Don't think others are like you, we, don't negotiate our self respect for anything in this world. A gutter like you tries to defame me, nothing happens. https://t.co/hvxIAMJ0QZ

Here’s the tweet of Lakshmi through which she thanked her supporters.

Thank you folks, for the love and wishes… I have faced this many times, when I stepped forward to help, helpless women & children. These characterless people think everybody is like them and to escape they will start throwing their shit at others. All's well, with God's Grace,

Check out the reply made by Vanitha below :

Ya right helpless women and children you are the biggest home breaker..stop ur atrocities ..u and ur bogus fake tv shows https://t.co/v3FotqQupr

Lakshmy Ramakrishnan, a 49 year old supporting actress and filmmaker, is known for hosting a show named as “Solvathellam Unmai”. On Sunday, a video of herself interacting with Elizabeth Helen and hearing about her complaints against Vanitha Vijayakumar streamed in a popular youtube channel. In the video Elizabeth explained Lakshmi about the conversation Vanitha Vijayakumar and Peter paul had earlier.

In that interview where Vanitha Vijayakumar and Peter Paul appeared for the first time, both of them narrated how they met and how it all happened since their first meet. Vanitha said that she met Peter Paul for the first time to hear a script which he is going to direct. Peter Paul was planning to feature Vanitha in a negative character. She who went with her daughters at that time, asked Peter Paul to feature her in another character which impressed the aspiring filmmaker. He said that he found her brilliant and proposed her to marry him. They conversed about many other things including why Peter Paul didn’t get legal divorce despite of 7 years of separation.

On seeing the video, Lakshmy said that the way they behaved during their conversation is completely unacceptable and said that their behaviour is “Atrocious” in the video. Vanitha Vijayakumar who got irked, appeared in a live interaction with Lakshmy and abused her directly by accusing her for involving in her personal issue.

When the host of the show tried to make them state their opinions one by one, Vanitha who intervened said that she never agreed for a debate. When Lakshmy said that the host of the show needs to be respected, Vanitha replied that she just wants to ask few questions to Lakhmy regarding the earlier interview she gave with Elizabeth. Things turned ugly when Lakshmy asked Vanitha to act with some dignity. Vanitha repeatedly asked Lakshmy who she is to have a say in a problem that took place between herself and Helen.

At one point, Vanitha started abusing Lakshmy’s husband, pointing out how Lakshmy reacted to that earlier interview. She even assassinated Lakshmy Ramakrishnan’s character and called her as “Garbage”. Lakshmy said that she didn’t want to involve in an argument with a street fighter. When Lakshmy wanted to disconnect the call, Vanitha said that she will record the video and will upload it to tear her apart.

Replying to Lakshmy who said that Vanitha is changing husband every year, the former Bigg Boss star abused Lakshmy Ramakrishnan in extreme bad words on air.

Unknown miscreants damaged the super bike of a famous motovlogger who is fondly called as Pyro's girl by he followers. She who enjoys 5...

Deepika Padukone joined the list of celebrities who are creating awareness for the deadly Coronavirus. She posted a video of washing her hands by...