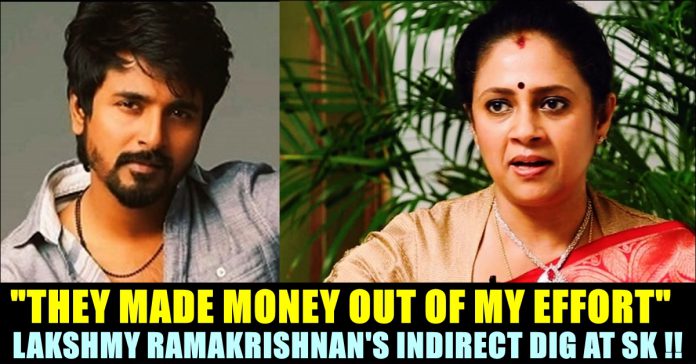 Despite of her acting and filmmaking stint, Lakshmy Ramakrishnan gained widespread fame through her reality-justice show “Solvadhellam Unmai” which streamed on Zee Tamil. The show which is based on real life incidents, concentrated on problems faced by families in Tamil nadu. Most of the episodes exposed how men and women are cheating their partners by involving in extra marital affairs. It also brought justice to the victims of sexual harassment. Lakhsmy Ramakrishnan who hosted the show for a long time was keen on sorting out the problems legally.

Arohanam, Nerungi Vaa Muthamidathe, Ammani, House Owner are the films directed by Lakshmi in her directorial career which started in 2012. Her onscreen appearance in films such as “Boss engira Baskaran”, “Vidiyum Munn”, “Rowthiram” were also widely recognised. However, a phrase she used in the show “Solvathellam Unmai”, “Ennamma Neenga Ipdi Panringaley Maa” became popular after it was used by TV comedy actor Ramar in Vijay Tv’s “Athu Ithu Ethu” game show. Followed by that, many of the phrases she used in the show was used by many comedians. A Tik Tok duo became popular across the Internet by using her voice as well.

Watch the popular song made out of her phrase below :

Sivakarthikeyan, one of the emerging actors in Kollywood film industry danced for a song in his Rajini Murugan movie which starts with “Ennammaa Ippadi Pannreengaley mmaa” referring to Lakshmy Ramakrishnan in Solvathellam Unmai. Now, while replying to a twitter user, Lakshmy Ramakrishnan took a sly dig at all of them who minted money making songs, spoofs and movies riding on Solvathellam Unmai’s success and popularity.

The twitter user who seems to be a meme creator thanked Lakshmy for helping him for a year through her reactions and counters in Solvathellam unmai. By tagging the actor’s official twitter account he thanked her with his whole heart.

Personally taking up twitter as the medium to thank Mrs. @LakshmyRamki (Solvathellam Unmai) because all her counters and adorable reactions in the show have been helping me big time as templates in many of my videos for more than a year now. Thanks ma'am! 😁👍💪 #gratitude

On seeing this tweet from him, Lakshmy Ramakrishnan said that people who made use of her show to mint money, mocked her efforts. She appreciated the online user’s gesture of showing gratitude towards her. “Thanks for acknowledging, when people minted money making songs, spoofs and movies riding on #SollvadhellamUnmai’s success and popularity, forget about acknowledgement, they went ahead and mocked my efforts , I appreciate your gesture” her tweet read.

Thanks for acknowledging 😁 when people minted money making songs, spoofs and movies riding on #SollvadhellamUnmai’s success and popularity, forget about acknowledgement, they went ahead and mocked my efforts , I appreciate your gesture 🙏😍 https://t.co/hVlFZwpKA7

It is notable that Lakshmy Ramakrishnan worked with Sivakarthikeyan before he debuted through “Marina”. She was supposed to introduce him to film industry through her project named as “Kurahl 786”

Not a short film! Meant to be my debut directorial with #SivaKarthikeyan, I was supposed to introduce him. After I dropped the project he did #Marina. His character in #kurahl786 had so much scope. But, he did great with respect to commercial success without that 🙂 https://t.co/0bxfQJnWBA