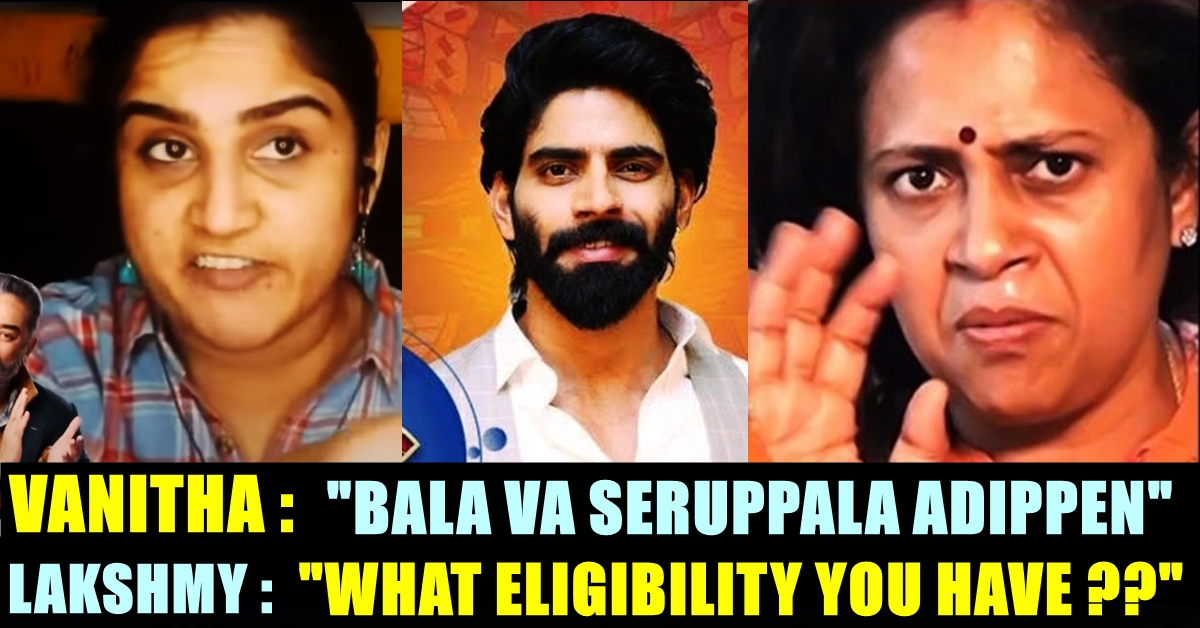 On seeing Vanitha Vijayakumar slamming Balaji Murugadoss of Bigg Boss while reviewing the reality game show, Lakshmy Ramakrishnan who had a major confrontation with the former months back, made a statement directly condemning her. The “House owner” maker questioned the eligibility of Vanitha Vijayakumar on criticizing a man.

Vanitha Vijayakumar is involved in analyzing the fourth season of the Bigg Boss show for a private youtube channel named “Galatta”. After knowing about a derogatory comment made by a male contestant Balaji Murugadoss against a female contestant Sanam shetty, Vanitha said that she will slap him with her slippers if she enters the house.

In the letter, Sanam shetty wrote that Balaji used the words “Adjustment/Compromise” to defame the beauty pageant title she received. “Used the words “Adjustment/Compromise” against a beauty pageant which I am the title holder of. This was without facts on basis of anonymous 3rd party reference was a huge” wrote Sanam in her letter. Since the screenshot surfaced in the internet, a set of people are demanding action against Bala for slut shaming Sanam shetty.

On knowing about it, Vanitha who is currently reviewing the show said that there is something wrong in his birth. “How dare you man ?? How dare you ?? Were you there holding the lamp ?? How can you talk about another woman’s character ?? How are you involved ??” asked Vanitha in a furious way.

“He can be handsome, He can be stylish or whatever, No people should appreciate or encourage this kind of a person.” said Vanitha. “Just because your mother made mistake, Don’t think all the women are the same.” she added. “If I go into the house, I will slap him with my slipper” Vanitha said in the video.

On seeing these statements of the actress, Lakshmy Ramakrishnan came up with a press release saying that Vanitha has no eligibility to question a man as she did a same mistake earlier. Referring to a video conversation that took place between herself and Vanitha, Lakshmy said that she unfortunately landed up in a conversation with Vanitha and gave her a chance to defame her in a cruel way. Read : Video Of Vanitha Abusing Lakshmy Ramakrishnan Goes Insanely Viral !!

“She called me the most, curel indecent names and said things which people like me who may lose our lives but would never negotiate with our self respect for anything in this world, can ever imagine. ” said Lakshmy in her statement and added that Vanitha did the same mistake of Balaji Murugadoss.

“This woman, who is born and brought up in cinema industry itself, did the same mistake that this man did and with what eligibility she is criticising him now ?? How will this dirty mindset change, when women themselves contribute to it ?” Lakshmy said in her statement and made it sure that her uncle’s words about “women in cinema industry” is true.

While posting the tweet, Lakshmy added the screenshot of Vanitha’s video on Bala’s behaviour. “I just couldn’t control myself seeing this” her caption of the post read.

I just couldn’t control myself seeing this 😂😂 pic.twitter.com/NPZCRUccjC

When one of a follower advised Lakshmy to stay away from Vanitha, the actor/director /TV host replied writing “No one can say anything worse than what that woman said :)”

Noone can say anything worse than what that woman said 🙂

Comment your views on these tweets of Lakshmy Ramakrishnan !!

“You Look Exactly Like Kamal” Said Fan To This Young Actor !! Check How He Replied
BIG NEWS : Natarajan To Wear Blue Jersey In The Upcoming T20 Series !!