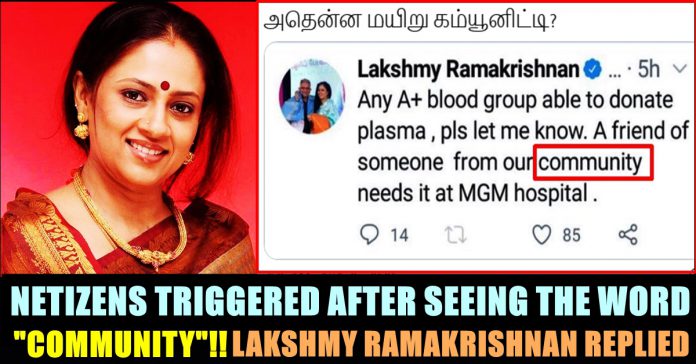 Actor, Director and celebrity host Lakshmy Ramakrishnan’s recent post regarding plasma requirement for her friend of friend went wrong as the term “community” in her tweet was misunderstood by the users of Twitter. Lakshmi Ramakrishnan is a popular personality who rose to fame by appearing in films such as “Boss engira Baskaran”, “Yuththam Sei” etc. She who directed a number of films, gained wide recognition among TV audience after hosting “Solvathellam Unmai” in Zee Tamil channel.

Recently, the actress caught in controversy after having a verbal spat with Vanitha Vijayakumar, a former Bigg Boss contestant and youtuber on air. Now, in one of her recent tweets, Lakshmy Ramakrishnan seeked the help of her twitter followers to reach a person with A+ blood group for a friend of someone from her apartment. “Any A+ blood group able to donate plasma, pls let me know. A friend of someone from our community needs it at MGM hospital” he tweet read.

The term “community” in her tweet irked few of the Twitter users who saw this tweet of Lakshmy Ramakrishnan. They who thought that Lakshmy Ramakrishnan is mentioning about her caste or religion, started posting hateful comments against the actresss.

On seeing these kind of comments, Lakshmy Ramakrishnan made it clear that she meant “gated” community which refers to her apartment people. Check out some of her replies below :

The “Aarohanam” director also posted a tweet saying that she saw the true colors of some people. Lakshmy who said that she couldn’t stop laughing, added that people should be aware of such people who are trying to divide. “I am so happy today , seeing the true Colors of some tweeple. imagine I have been taking these people seriously & considering their opinion as genuine. Can’t stop laughing . On the other hand , all of us have to be aware & beware of evil minds who r trying to divide us .” her tweet read.

To a twitter user who said that she would have just skipped the word instead of giving explanation later, Lakshmy said that she only mentioned “Gated” community.

To another explanation tweet, a follower asked why she married her daughters to “Iyer” to which the actress replied by saying “they choose their partners , not we and one is not Iyer, You guys have no other job , is it?!”

“I have a Anni from Africa 🙂 grow up guys” she said in her next reply.

Lakshmi Ramakrishnan has been facing constant criticism since she participated in a directors roundtable hosted by Film companion South. After facing several problems, the actress, in one of her recent tweet said that she is going to restrain herself from voicing out for public issues. Read : Follower Asked Lakshmy Ramakrishnan To Raise Voice Against Meera !! Check Her Reply Comment your views on these kind of accusations against Lakshmy Ramakrishnan and her replies to them !!

The impact Coronavirus is having today across the world is scary indeed. Renowned Hollywood actor Tom Hanks who is known for providing some quality...

In a recent press meet he conducted with the reporters of Tamil media, actor Sarathkumar opened on acting in online rummy advertisement. He who...