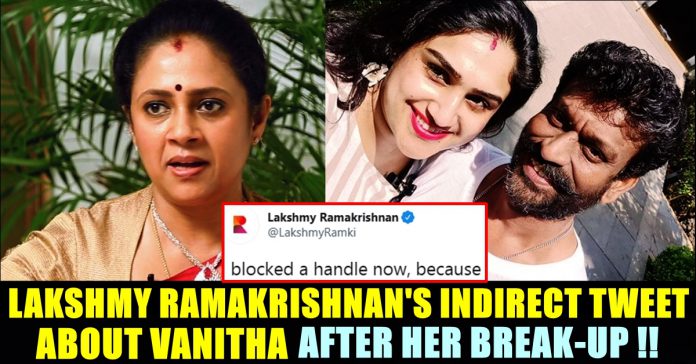 Vanitha Vijayakumar married Peter Paul during june month. After their marriage, a woman named as Elizabeth Helen raised complaint against Vanitha and claimed Paul as her husband. For involving in a video with Elizabeth Helen, wife of Peter Paul, Vanitha Vijayakumar abused actress and Director Lakshmy Ramakrishnan in an interaction that streamed on Behindwoods youtube channel.

Lakshmy Ramakrishnan, a 49 year old supporting actress and filmmaker, is known for hosting a show named as “Solvathellam Unmai”. A video of herself interacting with Elizabeth Helen and hearing about her complaints against Vanitha Vijayakumar streamed in Behindwoods.

On seeing the video, Lakshmy said that the way Vanitha and Peter Paul behaved during their conversation is completely unacceptable and said that their behaviour is “Atrocious”. Vanitha Vijayakumar who got irked, appeared in a live interaction with Lakshmy and abused her directly. Both of them assassinated each other’s personal character.

The video went extremely viral whereas people in social media took sides and reacted to it in various ways. Now, after three months, Vanitha made it public that she got estranged from Peter Paul citing his excessive alcohol consumption. “I believe that I entered in his life for a reason. I saved his life. Without me he wouldn’t have survived the heart attack. I entered in his life in halfway, now leaving it in halfway” said Vanitha while announcing about her break up with Peter. She also said that she has no objection in Elizabeth living with Peter paul from now on.

Now, in a tweet, Lakshmy Ramakrishnan quoted a saying of Periyar. “We could fight with thousand people who have honor. But if we fight with a single person who doesn’t have it, Our honor will disappear” the quote Lakshmy referred said. “I blocked a handle now, because I learnt my lesson 3 months back ; பெரியார் கூறியதாவது : “மானம் உள்ள ஆயிரம் பேரை, எதிர்த்து நின்று சண்டையிடலாம். மானம் இல்லாத ஒருத்தருடன் சண்டையிட்டால் நம் மானம் போய்விடும்” read her tweet.

Many of Lakshmy’s followers speculated that she is indirectly saying this message by having Vanitha Vijayakumar in mind. Check out some of their reactions below :

Vanitha it is. She is the only shameless lady. God forbid her kids should not turn like her

“I Only Watched Vijay Movies In Theatres” – Emerging Filmmaker’s Confession

Director Maari Selvaraj who rose to fame among Tamil audience through his debut film "Pariyerum Perumaal", is expected to create another magic through his...

Doctor Made An Inappropriate Comment On Nayan’s Marriage!! Chinmayi Exposed Him

Singer Chinmayi who is known for calling out the men who harass/disrespect/demean women in any way, recently, exposed a Doctor Who made a lewd...