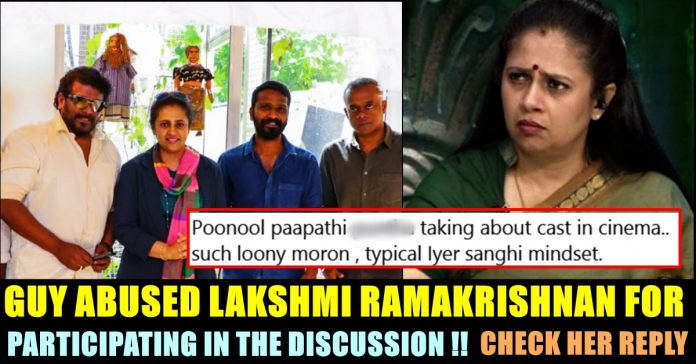 Lakshmi Ramakrishnan who is facing criticism for her participation in the round table discussion of Film companion south has said that she is receiving criticism due to the paid trollers Internet. Actor, Director and social activist Lakshmi Ramakrishnan took part in the round table discussion of directors in Film companion south. Arohanam, Nerungi Vaa Muthamidathe, Ammani, House Owner are the films directed by Lakshmi in her directorial career which started in 2012.

For her comments in the interview she has been facing criticism from the Internet users. Now, in a way of replying to them all, Lakshmi, in one of her tweet said that she forgot about the paid trollers and got emotional in the interview. “On a lighter note, மேலோட்டமா, politically correct ஆ பேசீட்டு வந்திருந்தா எனக்கு நல்லா இருந்திருக்கும்😍😍as usual உணர்சிவசபட்டு openஆ பேசீட்டேன். Forgot about the Paid trollers 😂😂” she wrote in her tweet.

Another user abused the actress and director in a bad taste, to which Lakshmi said that she now knows from whom she is receiving bad comments. Check out her reply regarding that below :

Excellent 🙂 now I am happy, I know who are the people who are commenting badly about my participation, and why:) thanks bro, for letting me know, you really made my day🙏🙏 lots of love and best wishes for a wonderful year ahead and MERRY CHRISTMAS… https://t.co/NJLEfHHHd1

She replied to few others who criticized her participation :

We r judged on the basis of which community we belong to, where we come from & of course gender!They judge you with their limited & tainted knowledge:) can’t think beyond the narrowness:) But #TN is not this !! the real people are so loving, it is worth all the trouble 😍😍 https://t.co/nrlcn9isyc

Lakshmi even said that her reverence towards the filmmakers considered as weakness. She said it while replying to a her twitter follower who felt that she was not given enough chance to deliver her perception.

You said it, I felt it while shooting itself. I have lot of respect and admiration for the film makers present there . But sometimes that reverence is misunderstood as weakness 🙂 https://t.co/MFP1a3KbnL

The youtube channel Film companion South has brought 6 prominent filmmakers of this decade under one roof for a round table discussion on films. Director Parthiban, Gautham Vasudev Menon, Vettri Maaran, Rathnakumar, Chezhiyan were the filmmakers who took part in the discussion along with Lakshmi Ramakrishnan. They conversed about many advantages and disadvantages of new age cinema which helped us to understand about their way of looking their craft.

In the interview, When Lakshmi Ramakrishnan was asked about her perception on the most significant trend of the decade, she said that women characters has been decreased. “I feel people’s taste is being groomed in a different way.” said the actor/ director who went on to add that she feels a bit uncomfortable with films based on casteism becoming a trend. “I enjoyed Pariyerum Perumal very much but few films on the same category are frightening me. I fear the reflection is opposite to what the creator is aiming at” said Lakshmi.

Previous articleGirl Child Suffers After The Arrest Of Her Parents !! WATCH !!
Next article“Don’t Destroy Our Career” Actor Took Sly Dig At Blue Satta !!