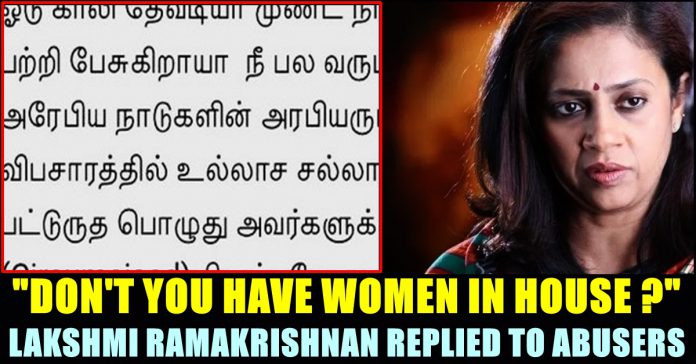 While cinema celebrities such as Gayathri Raguramm, S.Ve Shekar are uploading posts in social media platforms against actress Jyothika’s speech, actor Vijay Sethupathi and multi talented Lakshmi Ramakrishnan came up to stretch their supportive hand to the actress’s opinion about maintaining hospitals. As a result of it, both Vijay Sethupathi and Lakshmi Ramakrishnan became victims of online abuses and mindless trolls.

Lakshmi Ramakrishnan who is known for her presence in media industry, is very much active in the micro blogging social media site with more than 1 lakh followers. On Tuesday, the filmmaker shared a news of her stand in the recent controversy regarding actress Jyothika. Sharing the news, Lakshmi Ramakrishnan wrote “When I stood in solidarity with another lady celebrity during trying times, my brother #Ameer attributed it to
‘Paappathi’ connection. Now, when this lady celebrity got into controversy, I stood up to voice my opinion. what connection is this bro?!” as her caption.

When I stood in solidarity with another lady celebrity during trying times, my brother #Ameer attributed it to
‘Paappathi’ connection. Now, when this lady celebrity got into controversy, I stood up to voice my opinion. what connection is this bro?! pic.twitter.com/yV6D096uIC

During a conversation with her followers, Lakshmi exposed a screenshot in which one of a social media user can be seen abusing the actress in a bad way. Check out her conversation and the screenshot below :

Sure ma, I feel when someone is attacked unnecessarily, we should all stand together and voice our opinion. It is v important to raise our voice when something is unfair. https://t.co/fQ4tvBmsUi

You can’t imagine the language they use!! I will send you a screen shot!

I am sending here, let people know how the so called culture protectors behave!Abuse is done by people from all sides & they talk about culture, parambaryam, pakartharuvu etc . My humble request to common people, let us not get carried away by any of these, we stand together👍 pic.twitter.com/roVtXdhde8

Now, Lakshmi Ramakrishnan has came up with a video explaining why few people should stop involving in online abuses. Starting her video with a quote in “Bhagavad gita”, The actress said that even that god couldn’t help those vicious people who are abusing women in social media. “Don’t you have women in your house ?? I would write screenplay better than you. I won’t do it. Because my parents taught me how to be civilized.” she said in her video.

“I have seen the profiles of those who abused me in their comments. I could see few women in there. Where did you exported them from ?? Bombay or Kolkata or from Morocco ?? We know how to behave like you guys. But we won’t do that because we are cultured. First read and understand the context Ramayana, Mahabharata and Bhagavad Gita. Then we will save Hindutva together” she said to them.

Oh wow! How many stalkers I have here!! one ‘culture protector’ has written a screenplay on me & many of his followers have enjoyed it 🙂 This is for those ‘Hindu protecting’ brothers… pic.twitter.com/d6K3Mw9meR

Ever since the speech of Jyothika surfaced, many people are abusing those who are supporting it. In her speech, the actress said that Hospitals should be maintained in the same way how places like Brihadishwara temple in Thanjavur are being maintained. It is high time for people to understand the context of her speech and to stop spreading hatred against each other.

Who Is Going To Play The Female Lead In Legend Saravana’s Debut ??