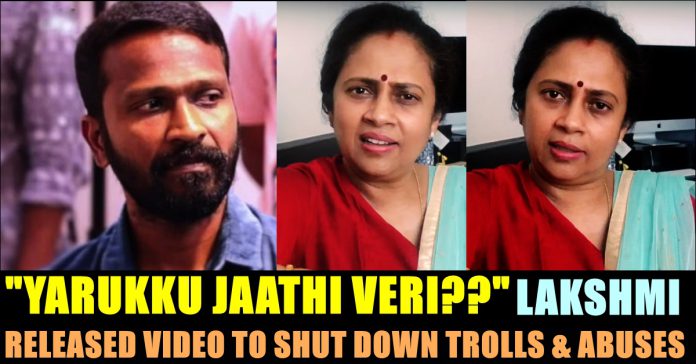 The filmmakers conversed about many advantages and disadvantages of new age cinema which helped us to understand about their way of looking their craft. When Lakshmi Ramakrishnan was asked about her perception on the most significant trend of the decade, she said that women characters has been decreased. “I feel people’s taste is being groomed in a different way.” said the actor/ director who went on to add that she feels a bit uncomfortable with films based on casteism becoming a trend. “I enjoyed Pariyerum Perumal very much but few films on the same category are frightening me. I fear the reflection is opposite to what the creator is aiming at” said Lakshmi.

She further added that she feels a bit worried on violence getting into film industry as a trend. In the middle of the conversation, Lakshmi even said that the title “Asuran” has negative connotation which was completely disagreed by director Vetri Maaran. These statements from Lakshmi instigated many people to troll and abused her based on her caste and religion. (Also Read : Lakshmi Ramakrishnan Facing Severe Criticism For Her Participation In Roundtable)

Now, in a way of replying to all the trolls and abuses, Lakshmi came up with a video to shut them down. She asked the trollers whether they are getting paid for trolling her. “Since the round table discussion, I see many unnecessary comments and trolls in daily basis. Don’t you guys have any other job ? Who is obsessed with caste? Me or those who trolling me? Someone in a comment said that I need schooling. Yes I need schooling on castes and religions as I don’t even know many of the castes you guys mentioned in the comments.” she said in the video.

Lakshmi further added that one needs guts to express what he/she feels. She even expressed her regression on being mentioned as “Paapathi” by the trollers. “Do really Paapan and Paapathi are obsessed with castes ?? Are the people whose problems I solved in Solvathellam unmai belongs to Paapan and Paapathi ?? In my own house there were many mixed marriages took place. We don’t do honour killings.”said Lakshmi who added that she loves movies like Madras, Kaala, Pariyerum Perumaal. “But the caste consciousness these movies creates is what I worry about” she said.

The “Arohanam” director asked people to care about the problems that are taking place in our country. “Let us concentrate on choosing a right leader for our country as we couldn’t choose whom to believe” she said by mentioning the CAA act passed in parliament.

Aasife Biriyani Owner Shedding Tears While Explaining Himself !! “Its A Complete Corporate Plan” He States !!

Aasife Biriyani is one of the prominent food restaurant in Chennai city which is well known for its unique taste and the Biriyani it...

Comedy actress Vidyu raman who is known for appearing in films like Veeram, Neethane En Ponvasantham inspired her 3 lakh Instagram followers by coming...

ADK’s Tweet About Vikraman After His Eviction Is Trending!!

ADK who got eliminated recently, has been tweeting about his opinions about the contestants and his relationship with them through tweets. Initially, he said...