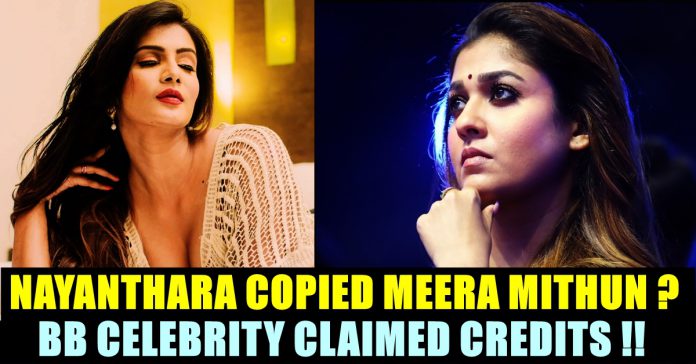 Meera mithun has slammed models and actresses for conducting photoshoots unnecessarily. If you are aware of Bigg Boss show’s third season in Tamil, you must have known about Meera Mithun , one of the most controversial participant of the show. One of the highly controversial episode of the season is undoubtedly the one in which Meera Mithun accused Director Cheran of physical harassment.

Followed by her Bigg Boss stint, the actress involved in many controversies and several audio conversations of herself with her accomplices leaked. She was removed from movies like Namma Veetu Pillai, Agni Siragugal for various reasons. In one of her interview, Meera Mitun even alleged that the boys who participated in Bigg Boss show loved her.

Now the actress took a sly dig at female celebrities who are uploading their pictures from their photoshoots in social media. She accused actresses for copying her style, in one of her tweets and even slammed them for copying the color of her phone case.

In her post Meera said that she is finding answers for the question papers assigned for her and asked others not to copy her. “You ppl even copy mobile covers omg, only uneducated actress do all this kind.”

It's my question paper of life assigned by destiny to which am finding answers for ! Go find ur life answers otherwise all you people are gonna end up in despair You ppl even copy mobile covers omg, only uneducated actress do all this kind.
Get a life people 🖕 pic.twitter.com/AV0T0hVp6M

Followed by this she confirmed that she is mentioning a Kollywood actress through her next tweet. She asked those to mention her name as inspiration before posting such posts. Here’s the tweet :

Going by these tweets of Meera Mitun, very few actresses in Kollywood are using a similar color mobile covers. Actress Nayanthara who is fondly called as Lady Superstar is widely known for using a red color phone case which is evident through her pictures which is doing rounds in social media platforms. Though the actress doesn’t have an official social media account, her pictures are constantly surfacing in social media through trackers and her boyfriend Vignesh Shivan.

Check out the pictures of Nayanthara using a phone with red color mobile cover :

Proud to be a pioneer ♥️ https://t.co/e7VHOKIN1d

What do you think on Meera Mithun comparing herself with high profile celebrities such as Kiara Advani and Nayanthara ?? Comment your views below !!