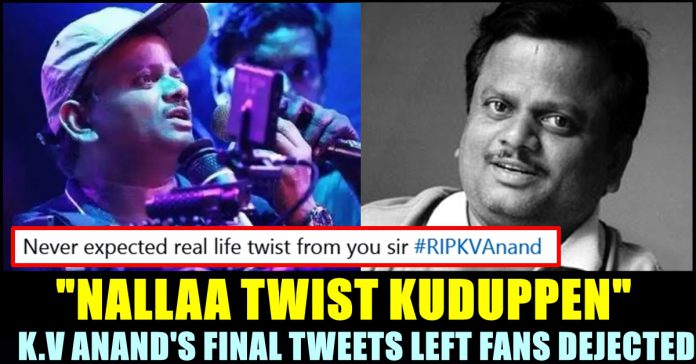 “Never expected real life twist from you sir” a fan replied to this tweet after his demise with many others offering condolences. KV Anand who started his career as a photo journalist, died of cardiac arrest at the age of 54 in Chennai. After working as a freelance photographer for a leading news papers and magazines such as “Kalki”, “India Today”, KV Anand went on to assist ace cinematographer PC Sri ram in films such as Devar Magan, Amaran, Meera, Gopura Vaasalile, Thiruda Thiruda etc.

After working as a cinematographer for a number of successful films, he ventured as filmmaker through 2005 film “Kana Kanden” and went on to make quality films based on chemicals and chemistry. The filmmaker suffered a heart attack in the wee hours of Friday and passed away at 3 am at a hospital. His last rites took place at Besant Nagar crematorium in Chennai and people were not allowed to pay their last respects as it is a death related to COVID 19 complications, according to Indian express.

Several celebrities from across the film industries of India including Rajinikanth, Kamal Haasan, Mohan Lal, Suriya, Dhanush posted tweets expressing their grief on the unexpected demise of the filmmaker. Now, the final tweets he posted in his twitter timeline are doing rounds with fans getting emotional.

Check out some of his recent tweets below :

Thanks! … and I got supportive Directors.

Here’s how fans got emotional on seeing these tweets of K.V Anand :

K.V Anand who directed Suriya, Arya, Mohanlal in “Kaapaan” lately, was planning to do a film with actor Simbu, according to a press note released by the latter. The filmmaker enjoyed a separate fan base for his narrative style and the frames he composes. Let us pray for the soul of the ace creator to rest in peace !!

Previous article“There Is An Army Of Us With You” – Celebrities Supporting Siddharth Along With Public !!
Next articlePopular TV Anchor Compared New Zealand & India ??

Famous Tamil lyric writer Kabilan's daughter found dead at her house in Arumbakkam. Named as Thoorigai, the youngster who is a costume designer by...