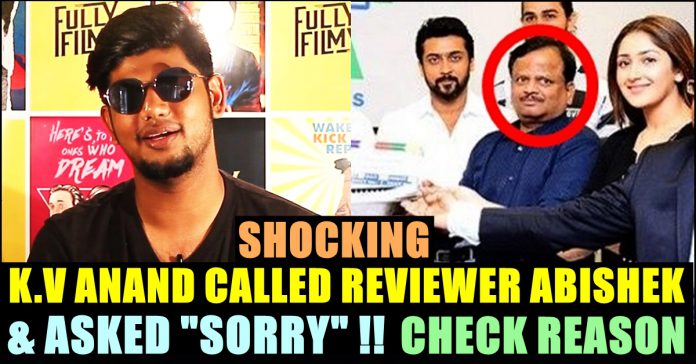 K.V Anand’s Kaapan which is the third collaboration of himself with actor Suriya is running successfully in theatres. Starting his career as cinematographer, K.V Anand’s few directions such as Ayan, Ko made impact in Tamil cinema. His collaboration with actor Vijay Sethupathi in the movie Kavan was widely appreciated and a particular clipping of a promotional interview for Kavan movie during those days surfaced in twitter now for some other reason.

The video interview which was released in Fully Filmy youtube channel was interviewed by popular movie analyst Abhishek Raaja who is known for his 2 minutes movie review in the same channel. Yesterday, one of a twitter user shared a particular clipping from his interview of K.V Anand and Vijay Sethupathi during the release time of “Kavan”.

The video shows K.V Anand mocking Abhishek Raja for showing off his intellectuality through asking questions. “He is trying to prove his sharpness by asking question in this way” says K.V Anand to Vijay Sethupathi. “He could have asked this question in a simple way. But this is something we should learn” he continued to which Vijay Sethupathi reacted by asking “So he is trying to prove his wiseness??”

The user who shared this video slammed Abhishek Raaja for still carrying such kind of attitude in his interviews. Check out the post of the user below :

On seeing this post, Abhishek immediately reacted by saying that director K.V Anand called him the very next and asked apologize for being so rude in the interview. He also added that K.V Anand’s father was in ICU during that interview. “To learn I will continue to be this” he added in his post.

Kv Anand sir called the very next day and apologized for being rude. He father was in the ICU when he gave this interview.

Check out few of the reactions for this tweet of Abhishek :

Respect your work! You interviews have always been different every time and you have always asked questions out of the box! Your genuine followers will always respect you and your work! Keep going!

I am sure he didn’t insulted you !! But he exposed what you are!! Even I felt the same !! You never try to interview anyone, you always try to express that you are super talented in cinema but actually you are not ! But you have fan following for your intellectual &I respect that

What do you think on K.V Anand apologizing Abhishek Raaja for being rude ?? Comment your views below !!

A 21 year old Delhi based youtuber named Namra Quadir got arrested by Police officials for allegedly cheating Rs. 80 lakh from a businessman....

Why Jadeja Handed Over The Captaincy Back To Dhoni ?? Here’s How Internet Reacted

Ravindra Jadeja who was appointed as a captain for team Chennai Super Kings during the start of the ongoing IPL season, handed over the...