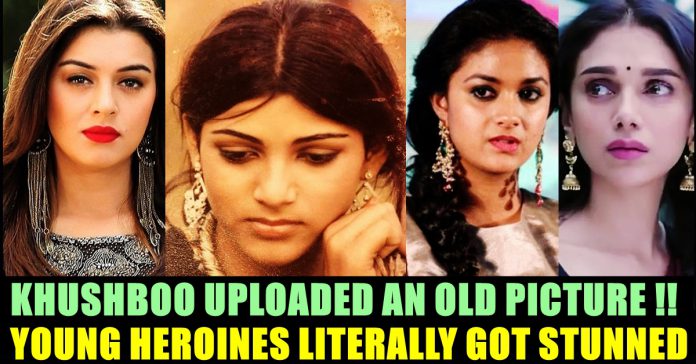 Kushboo Sundar who is known among Tamil audience for her onscreen appearance, posted a picture of herself in her official Instagram account in which she enjoys more than 5 lakh followers. The actress posted a 36 year old picture of herself with a caption saying “When all that ran in the wind was to make your dreams come true..achieve what you aspire..prove the world wrong when they said you can never make it.. #1983 Photography #Late #JPSinghal” ( Also Read : Kushboo Gives Back To A Guy Who Made Irrelevant Comment On Her Post !!)

When all that ran in the wind was to make your dreams come true..achieve what you aspire..prove the world wrong when they said you can never make it.. #1983 Photography #Late #JPSinghal

This post from the actress impressed many heroines who are working in the industry right now. Actress Hansika who is fondly called as the “Kutty Kushboo” by the fans expressed her admiration by commenting “So pretty ” with a heart emoji. For this comment, Kushboo replied to her by saying “not as pretty as you darling😘♥️♥️♥️”

Followed by this, actress and national award winner Keerthy Suresh who is going to share screen space with Khushboo in Thalaivar 168 was also stunned. The commented with a “heart in the eyes” emoji to show her love towards the post.

Khushbu started her career as a child artist in the Hindi film The Burning Train in the song “Teri Hai Zameen Tera Aasman”. Between 1980–1985 as a child artist she did Hindi films such as Naseeb, Laawaris, Kaalia, Dard Ka Rishta, Bemisal and various others. In her prime time, Khushboo paired with both Rajinikanth and Kamal Haasan. After marrying director Sundar C, the actress started her own production venture. She is now all set to appear along with Superstar again in Thalaivar 168.

Previous articleDarbar-2 On Cards ?? A.R Murugadoss Revealed !!
Next articleFans Comparing Young Actress With Nayanthara After Seeing This Picture Of Her !!