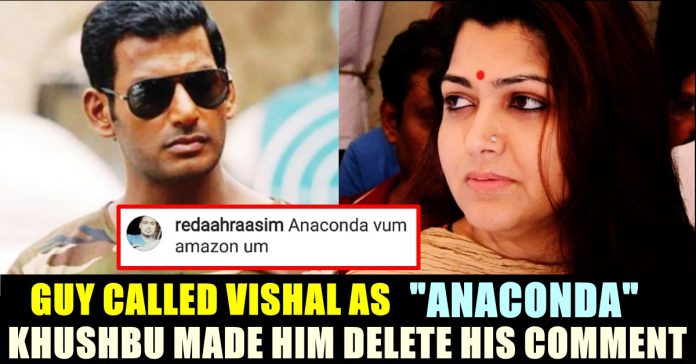 Social media don’t know the value of the emotions expressed by the celebrities in online medium. Many high profile celebrities got trolled and abused by random social media users in daily basis. Some would post their pictures and would never turn back to it due to the intolerance of abusive comments and the other would give them back right away.

Kushboo Sundar who is known among Tamil audience for her onscreen appearance, made an abuser taste his own medicine by replying to his comment on her post. On the 4th of December, Khusbhu posted a picture with actor Vishal with a caption saying “Two best buddies who can never be normal.. partners in crime..miss you already..come back soon..🤣🤣🤣🤣🤣🤣😍😍😍 #Vishal..”

Khushbu enjoys more than 5 lakh followers in her Instagram account. On seeing her post with Vishal, one of a random follower of her made an obscene comment to troll them both. He wrote “Anaconda vum Amazon um”

The actress who never shied away from giving back the abusers what they deserve, immediately trolled him back by writing “Unga Amma Flipkart aa??”. The user who didn’t expect such reply from the actress deleted his comment for unknown reasons. However, the screenshot of the same is still doing rounds in social media platforms.

After seeing such reply from Khushboo, another follower of the actress questioned her why she is dragging his mother into this by trying “Khushsundar, why are you involving his mother, as a woman why are you unnecessary criticizing a another woman..???”

To this question, the “Chinna Thambi” actress replied in a way of making everyone understand that she herself a mother of two children. “becoz none of you realize I am a mother too..got it??”

The actress who has worked with Vishal in “Ambala” has a special bonding with him which is evident through her social media posts. Being an Indian film actress, producer and television presenter, She has acted in more than 200 movies. She is predominantly known for her work in the South Indian film industry. Khushboo joined the Indian National Congress on 26 November 2014 after meeting with then Congress President Mrs. Sonia Gandhi, and then Vice-President Mr. Rahul Gandhi. She is currently the National Spokesperson of the INC.

What do you think on these replies gave by Khushboo to those who spreads hatred in her post ?? Comment your views below !!

Jayam Ravi’s 24th film has been titled Comali. The actor shared the news on his official Twitter handle along with the title look of...

Video Of Babloo Prithviraj Clarifying About His Alleged Secret Marriage!!

Video of actor Babloo Prithviraj clarifying about marrying a 23 year old woman is out. In the video, the actor was seen saying that...