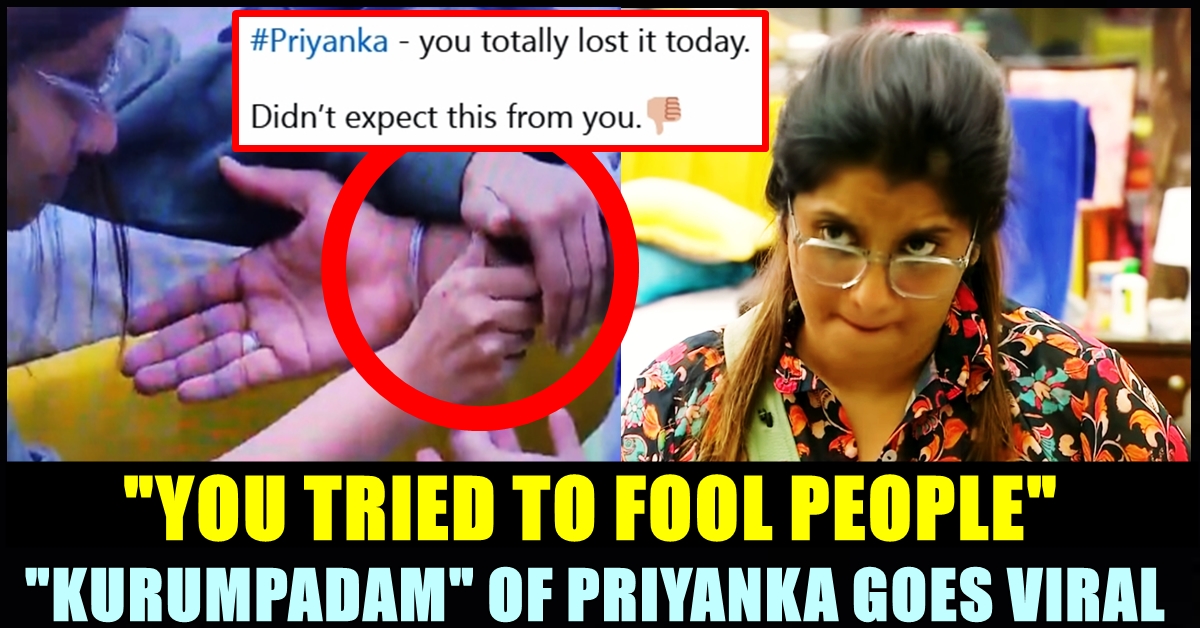 Ever since Kamal Haasan streamed a “Kurumpadam” for Julie, one of the contestants of Bigg Boss season one, viewers of the show has been coming up with their own to expose the hypocritical behaviour of the contestants. Now, the first ever “Kurumpadam” of Bigg Boss season 5 has been released by the netizens and it belongs to Priyanka Deshpande of “Super singer” fame. In the video, viewers of the show exposed the contradictory behaviour of the Television anchor who also runs a youtube channel.

In the Wednesday episode, Priyanka criticized Akshara for writing something to convey to one of her co-contestants and flushing the paper in toilet. “You are doing things in a silent way. People do not know. They don’t know what you are writing in your paper. Just because we are talking loud, it looks like we are making strategies and it is being portrayed that you are suffering from your mother feelings. It sounds too safe but not good” Priyanka says to Akshara on the 17th day of Bigg Boss season 5.

As soon as seeing the episode, viewers got reminded of something that took place in one of the previous episodes. Priyanka who lectured Akshara not to speak secrets, wrote something on the hands of Niroop to make him understand something which she doesn’t want camera to capture. Compiling both the videos, fans demanded Kamal Haasan to stream it as a “Kurumpadam”. “KamalHaasan sir, Oru kurum padam parcel please! What #akshara did is wrong than what #Priyanka did is also absolutely wrong!” a social media user said by adding both the videos.

Many users also got upset over Priyanka checking Chinna Ponnu by accompanying her to the bathroom. They who felt that it is an inhumane behaviour, pointed how she doesn’t wanted anybody to touch her belongings. Check out some of the reactions that surfaced against the TV anchor :

So priyanka is camera conscious & She knows how to convey a thing secretly without getting caught on ca & mic
She isn't fair & true to herself & audience..doing same what Kavin did in S3 by turning the mic off
Not going to cast a vote for her#BiggBossTamil5
Meme : @bbstamil pic.twitter.com/GIyvvDLbzT

#Priyanka – you totally lost it today.

Didn’t expect this from you.👎🏻

When you tried to fool people by using some stupid signs to communicate and what was that – hiding and eating? 🤦‍♂️#BiggBossTamil5 #BiggBossTamil pic.twitter.com/YSiUqKZhZJ

@ikamalhaasan sir please put priyanka in her place. She should not act like bigg boss of the house!!! 🙏🙏🙏#BiggBossTamil5

#Priyanka taking #Chinnaponnu inside the bathroom for personal search is way too much, she is going overboard.#BiggBossTamil #BiggBoss #biggbosstamil5

Most irritating #Abhishek & #PriyankaDeshpande speaking abt rules. These two talked abt nomination, wrote in hand. Broke all the rules. #BiggBossTamil5 pic.twitter.com/f4Rzn3ebNC