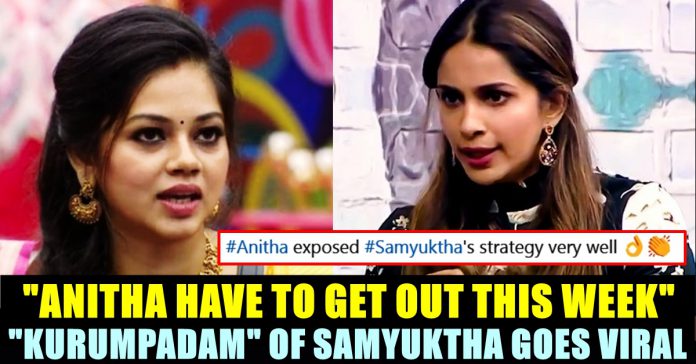 The ongoing Bigg Boss show went past 50 plus days but didn’t see a single “Kurumpadam” so far. Contestants who followed the three seasons keenly, are refraining themselves from getting involved in a “Kurumpadam” it seems. However, fans couldn’t keep calm as they started making their own “Kurumpadams” and letting it do rounds in the social media platforms.

Recently, a twitter user came up with a “Kurumpadam” for Samyuktha who said that she wants Anitha Sampath to get out of the Bigg Boss house. Aari Arjunan, Balaji Murugadoss, Soma shekar, Sanam shetty, Aranthangi Nisha, Jithan ramesh and Anitha Sampath were nominated for the eviction initially. After the nomination process, Bigg Boss showed a conversation Samyuktha had with Somashekar.

During the conversation, Samyuktha could be seen saying that either Anitha Sampath or Sanam shetty must get evict this week. Talking to Som she says “You don’t have to worry. As far as I know, Anitha or Sanam have to go”.

“Her strategy is to stay safe till the finals without getting nominated. When it comes to open tasks, she would accuse the weaker contestants to play a safe game. She also behaves rude at times” said Anitha to nominate Samyuktha.

A follower of the reality game show, linked the series of incidents and made a “Kurumpadam” with “Petta” background score. “Ithu kooda nalla than irruke, Samyuktha nee oru kanuku podura #BiggBoss oru kanuku poduran” his caption for the post read.

Many other twitter users appreciated Anitha saying that she exposed the true colour of Samyuktha which caused the twitter trending of “Samyuktha” hashtag. Few of them believed that she will get evicted by the weekend as well. Check out some of the reactions below :

This week #Samyuktha will be evicted ☺️ Anitha speak the way against samyuthktha is 100% correct .#BiggBossTamil4

Anitha and Sanam: Hold my 🍺

#Anitha & #Sanam gave much reasonable opinions to nominate #Samyuktha. Happy for #Anithasampath to win it finally. Loved that swag in the end 😍 #BiggBossTamil4 pic.twitter.com/5QjsdvaCCQ

Karma is a Boomerang. Previously #Samyuktha came into captaincy task as a last minute Replacement for #Nisha immunity used by #RamyaPandian. Now #Anitha using the card and put samyuktha as her replacement in nomination this week #BiggBossTamil4 . Dis may be last week of sam in BB