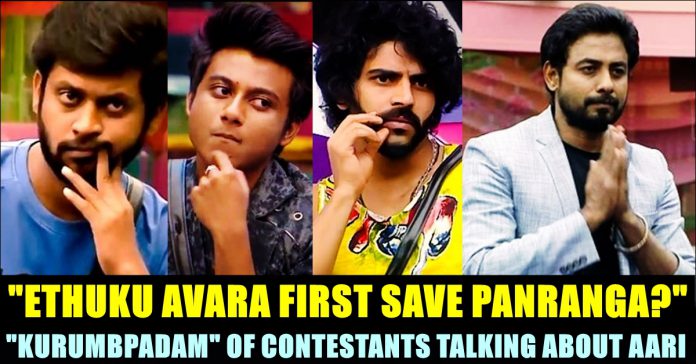 Ongoing Bigg Boss season is currently engaging fans by providing different kind of tasks to the contestants of the show. As the competition is nearing its end, the game is getting tougher. Ramya Pandiyan, Aari Arjunan, Balaji Murugadoss and Rio Raj are the strongest contenders who are expected to clinch the trophy of Bigg Boss after Aarav Nafeez, Riythvikha and Mugen Rao. Fans of the above mentioned contestants are always involved in verbal spat with each other in social media platforms.

So far, the show has witnessed a number of controversies, confrontations, arguments, quarrels and some interesting physical tasks. Nine contestants including Archana Chandhoke, Aranthangi Nisha, Jithan Ramesh, Sanam Shetty, Samyuktha, Mirchi Suchi, Suresh Chakravarthy, Vel Murugan, Rekha got evicted from the show. Now, as the game gets tough contestants could be seen blaming each regarding various issues.

Contestants and audience believe that a contestant who is getting saved first by Kamal Haasan in the weekend episode, could be the one who gained highest number of votes from the fans. Based on this order, contestants and audience are concluding the strongest and weakest participants of the show every week. Actor Aari, one of the participants of the show is getting saved first by KamalHaasan in almost all the weekends after getting nominated by his co-contestants for eviction.

“I have a doubt. I don’t understand why audience are saving him first. Are they doing it to troll us ?” asks Balaji Murugadoss to this co-contestants to which Aajeedh says that it might depend on the amount of footage he manages to grab. “In that case, Sanam could have grabbed most number of footages. Why she got evicted ??” replied Shivani.

“Maybe, it is because the way he validating his activities in a good way through his speech.” says Aajeedh to which Rio accepts. “I too felt it last week” Rio said. “More than what you do, it seems it depends on how you explain it” Aajeedh continued.

Previous articleFans Thrashed Seeman For His Statement Against Vijay !!
Next articleWhy It Is Called A “BOXING DAY” Test ?? READ

Harbhajan & Tahir Went One Step Ahead To Troll Kolkata After Winning !! You Just Can’t Miss !!

In Match 23 of VIVO Indian Premier League, a clinical Chennai Super Kings (CSK) maintained their unbeaten run at home with a seven-wicket thrashing...

Harnaaz Sandhu who got crowned as Miss Universe recently, replied to trolls and criticisms that alleged that she won the competition due to her...