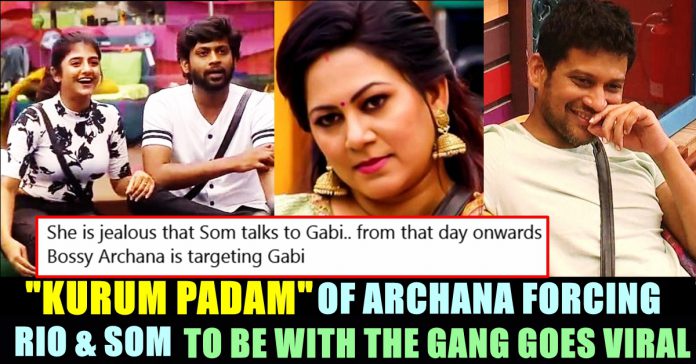 Video of Archana expressing her disappointment over the behaviour of Rio and Soma shekar is doing rounds in social media with various kind of reactions. Archana who is being accused of involving in “groupsim”, always denied it and said that her love for the housemates is equal. Now, in this video, she could be seen condemning Rio and Soma shekar for not spending much time with herself and Nisha throughout the week. She walks off furiously after saying that Som and Rio spent most of their time laughing among themselves.

In the weekend episode, Kamal Haasan called out the gang of Archana and co and advised them not to misuse the term “Love”. The five members gang which includes Archana, Rio, Soma shekar, Nisha, Jitham Ramesh are calling themselves as “Love bed” gang. Balaji Murugadoss who dislikes the strategy being handled by the “Love bed” gang, made a strong statement against them in front of Kamal Haasan in the weekend episode.

Archana had gained enough number of haters for forming a gang and ruining the spirit of the game by making her gang vote for a single person whom they wants to be evict. Now, after hearing what Kamal Haasan had said, Rio, Som shekar and Gabriella decided to move on it seems. They spent most of their times with other contestants.

However, Archana who couldn’t bear the fact that her gang is getting dismantled, expressed her emotions by gathering Rio and Som for a meeting. “You, Soma shekar and Gabi never spent with us throughout the week. Nisha needed you guys in so many tough situations but you guys were never there.” Archana says to Rio and Somashekar in the presence of Jithan Ramesh and Nisha.

“We don’t have any problem with you guys laughing together. In fact, we were happy realizing that at least you guys are having something in common. But can I tell you something ?? Shouldn’t we deserve to be with you while you were laughing?” Archana questioned Som.

“According to me, you had no interest in spending time or energy with us throughout the week.” she tells to Som. “I am really sorry but you have been very very busy.” she further says and Som responds by asking back whom he had been busy with. “That you know best” Archana replies.

Fans who had captured the particular part of the episode, are sharing it in the micro blogging social media site by slamming Archana for forcing Som and Rio to bein the gang. Watch the video below :

“its evident -#gaby #som #rio..trying to move away from her n she is trying hard to get them in fold. better “trio” to play as they have potential” wrote a follower on seeing the video whereas another one said “She is jealous that Som talks to Gabi.. from that day onwards Bossy Archana is targeting Gabi”

Check out some of the reactions for the video below :

its evident –#gaby #som #rio..trying to move away from her n she is trying hard to get them in fold

better "trio" to play as they have potential #BiggBossTamil

She is jealous that Som talks to Gabi.. from that day onwards Bossy Archana is targeting Gabi

OMG this #Archana is spoiling the game big time 🤦🏼‍♀️ Please send her out. This exactly is the effect of groups in house. You are not here to live happily ever after. #BiggBossTamil4

Ayyo..sirikka kuda mudiyatha intha amma illama. Enna koduma sir ithu. Pls evict Archana, she is not allowing anyone to play and be themselves. Always wants them to be near her. Obviously they r trying to move away from both of them #BiggBossTamil4

Previous articleSehwag Opened On Buying Natarajan For A Huge Price For The First Time !!
Next articleAustralian Head Coach Justin Langer Got Hilariously Trolled After The Concussion Issue !!

On Sunday morning, finance minister Palanivel Thiagarajan came up with a tweet reacting to the shameful incident that took place on Saturday noon. Posting...

Sunny Leone is currently enjoying a holiday in Cancun, Mexico, with her husband Daniel Weber and their friends. She gave fans a sneak-peek of...