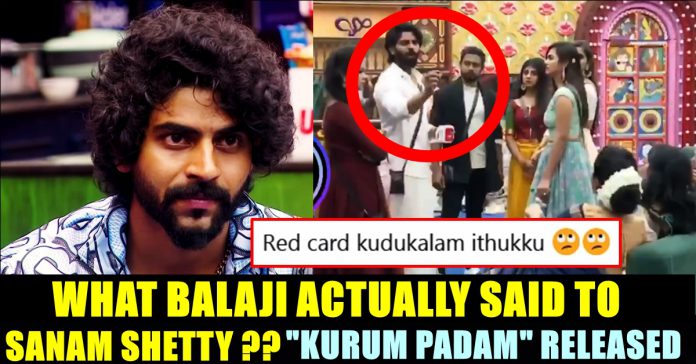 In the last season of Bigg Boss show, a contestant named as Saravanan who is a well known actor among Tamil cinema audience, was sent out of the house for a derogatory comment he made in the Kamal Haasan hosting show. Even after he made a public apology to the people of Tamil nadu, he was sent out due to the agitation his statement created in the outside world.

During a weekend episode of While Kamal Haasan was discussing about Cheran-Meera issue, he tried to explain the difficulties of Tamilnadu middle class women who are facing physical harassments in government buses during peak hours, to make Meera realize that it is not a big deal. “There are also men who boards government bus only to touch women inappropriately” said Kamal Haasan. When he said this example, Saravanan, raised his hand. “It seems Saravanan gave severe beating to a man who did it” said Kamal to the audience.

Saravanan denied it and said that he is the one who did it deliberately during his college days which made the audience in the hall to burst out in laughter. Kamal Haasan also took it in a lighter note and sarcastically trolled him by referring one of his popular phrase “Athayum Thaandi Punithamaitaaru”.

However, Saravanan’s comment created huge outrage and he was terminated from the show for objectifying women in a public show, even after he made an apology. Now, Balaji Murugadoss, one of a male contestants of the ongoing Bigg Boss show, made a similar comment the show according to Internet users who are demanding a red card for him. for making such comment.

It all started when the social media handles of Vijay Television deleted the first promo that released on Tuesday. On seeing all the social media handles of Vijay television removing the promo, netizens came up with a speculation assuming that a particular frame of a letter written by Sanam to make a complaint against Bala in the court (artificially created for task) created made them to delete the promo.

Since the screenshot surfaced in the internet, a set of people are demanding action against Bala for slut shaming Sanam shetty. Now, a twitter user named as Imadh came up with a video evidence proving Balaji’s derogatory comments against Sanam. In the video clip, Balaji can be seen saying to Sanam that she should have talked about herself instead of dragging the entire women society.

Another video of Aari and Suresh Chakravarthy discussing about what Balaji said to Sanam was also captured by the followers of the show. In the video, Aari says that what Balaji said is outrageous and he restrained himself from questioning Balaji as it was just a fourth day of the Bigg Boss show.

kurumpadam on #bala . #Aari bro talking about the word he told to #sanam.listen the conversation carefully. #Suresh clearly mention the word dubakoor is not a problem. so he has definitely uttered something which the tv is hiding from us #EvictBala #BiggBoss4Tamil #bigbosstamil4 pic.twitter.com/Ukg8Jx6fQk

On seeing these videos, fans who are keenly following the reality game show, trended hashtag “Evict Bala” and demanded red card for him.

This statement more than enough for red card..

Actor-turned-politician Karunas has been booked by the Chennai city police for a controversial speech he made in Chennai on Monday, which has now gone...