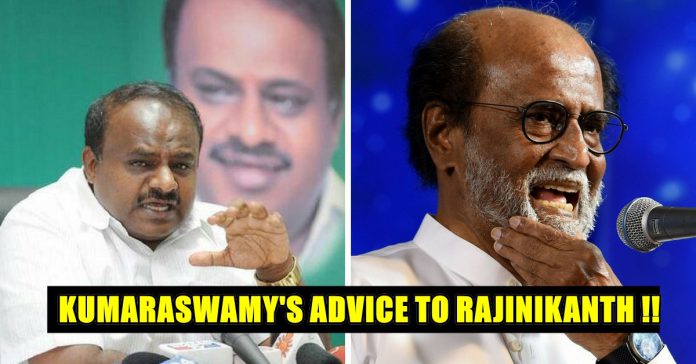 Kumaraswamy Wants Rajinikanth To Learn Something About Karnataka Before Making Comments !!

JD(S) leader HD Kumaraswamy may not have taken charge as Karnataka Chief Minister just yet but he is sticking to the stand of the earlier Congress government that the state does not have enough water to share with Tamil Nadu.

The JD(S) that emerged third in the recent Karnataka assembly elections is set to form the next government with the support of the Congress after the two parties stitched up a post-poll alliance. “It is only if there is water in Karnataka that it is possible to give water,” said Mr Kumaraswamy when asked for his reaction to superstar Rajinikanth’s comments that Karnataka should follow the Supreme Court order on sharing of Cauvery water.

“I invite Rajinikanth to come here and look at the situation of our dams, the position of our farmers… If after you see that, you still say you want water, let us discuss it,” the JD(S) leader said. He was responding to a question about the reported statement by the actor-politician in Chennai asking the new government in Karnataka to release to Tamil Nadu its share of Cauvery river water as mandated by the Supreme Court verdict. There have been huge protests across Tamil Nadu over the delay by the centre in setting up the body that will oversee the water sharing. Actor Rajinikanth had called the delay disappointing, saying it would affect the livelihood of Tamilnadu farmers.
[wp_ad_camp_1]
On Friday, the Supreme Court said that a 10-member body called the Cauvery Management Authority will oversee and regulate water sharing but Karnataka will continue to have control over dams in the state.

Actor Rajinikanth, who has already announced that he would form a political party and contest the next assembly polls in Tamil Nadu, said it would have been good if the authority controlled the dams.
Previous articleKamal Haasan’s Innovative New Promo Of BIGG BOSS Season 2 : Exclusive !!
Next articleBREAKING : Mysterious Nipah Virus Killed 5 & 9 Critical In Kerala : Symptoms, Prevention Here !!

Madhavan’s Heart Winning Reply To Fans Who Thrashed Him For “Maara” !!

Ranganathan Madhavan's Tamil version of 2015 Malayalam blockbuster "Charlie" released on Amazon Prime on 8th of January. Since the release of the film, Madhavan...