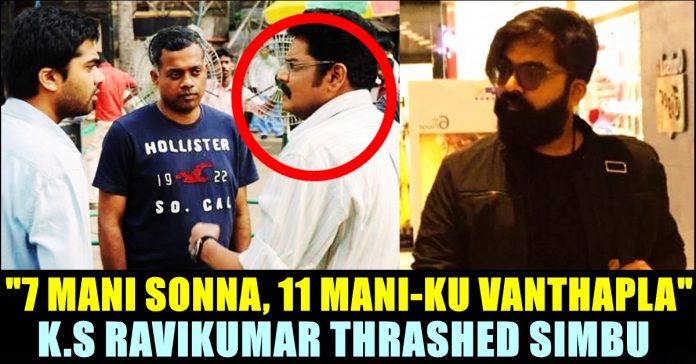 K.S Ravikumar is one of the most experienced filmmaker of Kollywood film industry. In a career spanning around 30 years , he has directed some of the most recognisable and well-known films of all time evergreens and is considered one of the most popular directors in Kollywood. Being one of the very few filmmakers of Kollywood who directed all the top stars such as Rajinikanth, Kamal Haasan, Ajith Kumar and Vijay, Ravikumar has took part in an interaction with a senior director of Tamil film industry Chithra Lakshmanan for his youtube channel Touring Talkies.

In the interaction, he shared many incidents that he went through during his filmmaking career. Starting from directing veteran actor Shivaji Ganesan and Superstar Rajinikanth to wielding the megaphone for Little Superstar Simbu, KS Ravikumar shared many of his experiences to the audience.

On sharing his experience about handling Simbu who is one of the most controversial actor of Kollywood, Ravikumar said that everything lies in the way we treat people. “First we have to learn how to mingle with an actor. Not only with Simbu. Take any actor, one must approach them in a positive way” said K.S Ravikumar while talking about Simbu.

Simbu and K>S Ravikumar worked together in the film Saravana. It is a love story set in the backdrop of a village starring Silambarasan, Jyothika, Five Star Krishna, Vivek, and Prakash Raj in the lead roles. The film was a high-budget production and the soundtrack was composed by Srikanth Deva. The film which released in 2006 is a remake of a Telugu film “Bhadra”.

“He delayed to appear in shooting spot for a couple of days. On the third day I told to Simbu that I will get myself out of the project. I asked him to continue the film with any of the director he like. I also said that I will issue a no objection letter regarding my walk out. He immediately tried to convince me to stay in the project. I just talked that way to make him attend shoot on correct timing.” said the veteran filmmaker.

“If I prepare to shoot on morning 7 am, I can’t do anything if my artist arrives to spot on 11am. Instead he can inform me on prior to shoot which will help me to plan accordingly. I told the same to Simbu after which he started informing me the timing. That’s how I completed the shoot of that film” he added.

What do you think on this revelation of the filmmaker ?? Comment your views below !!