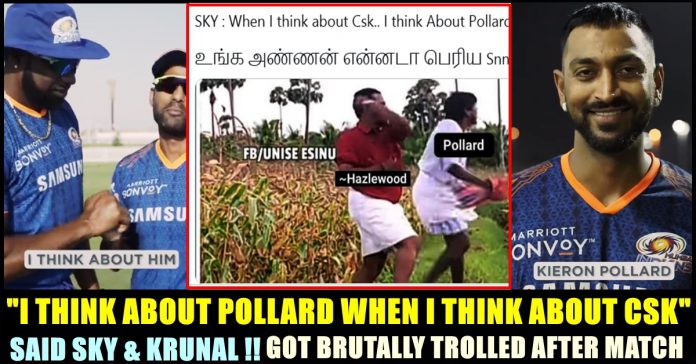 Post the result of the second match between Mumbai Indians and Chennai Super Kings in the ongoing IPL tournament, Krunal Pandiya and Surya Kumar Yadav of Mumbai Indians are getting trolled after saying that they think about Kieron Pollard when they think of Chennai Super Kings, prior match. In the first league that took place between CSK & MI, Pollard smashed a 34 ball 87 and made Mumbai win. The team were struggling by losing 3 wickets for 81 runs while chasing a mammoth total of 200 plus. Pollard’s heroic innings helped them to taste the victory.

Now, in a quick video session, players of Mumbai and Chennai were asked to tell one word that comes to their mind when they think of their rivals. While Chennai players were using words such as “opponent”, “Excellent”, “Power house”, “success”, Surya kumar Yadava and Krunal pandya of Mumbai Indians said that they think of Kieron Pollard while thinking about Chennai Super Kings.

More than just a rivalry! 🔥

In the second league that took place on Sunday, Chennai won effortlessly by restricting the Mumbai batsmen for 135 runs who were chasing a total of 156 runs. Ruturaj’s knock of 88 from 58 and Bravo’s quickfire 23 helped the yellow team who were struggling by losing 4 wickets for just 24 runs. Kieron Pollard who was captaining the team, lost his wicket to Hazleweood while playing at 15. Now, after the result, Surya Kumar Yadav and Krunal Pandya are getting trolled by the fans for their statement about remembering Pollard while hearing “Chennai Super Kings”.

“you can see the class of a player from there answers ! krunal pandiya” a fan wrote on seeing the video whereas many memes surfaced trolling the MI players. Check out some of them below :

SKY : When I think about Csk.. I think About Pollard

This fella when asked about what he remembers when he thinks about CSK, he said “Kieron Pollard”. This when every other MI player said good positive things on CSK. Take that,KRUNAL!!! 🤫😜😂