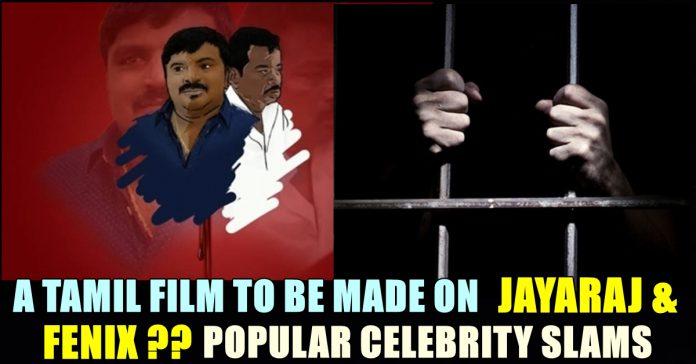 Four police officers linked to Sathankulam lockup murder have been arrested under Section 302 of Indian Penal Code on Thursday. Sub-inspector Raghu Ganesh was the first one to get arrested regarding the case. The three others which includes sub inspector Bala Ganesh and constables Murugan and Muthuraj. Later, the CB CID included the name of Inspector Sridhar and arrested him near Kovilpatti according to reports.

Earlier, CB-CID team visited Fenix’s mobile shop was checked the place from where his father was picked up by the police on June 19. The team then split into two, One team went to Fenix’s home and conducted an inquiry with his Mother and the second team went to the sathankulam police station.

This case of sathankulam lockup murder received nationwide attention after people came to know about the torture Fenix and Jayaraj went through, mobile shop owners in Sathankulam town, Thoothukudi. Suchithra, one of the many known faces who raised voice for the issue, became a main reason behind the issue getting nationwide attention.

Suchi who was in limelight few years back for all the wrong reasons, is now being lauded by the users of Internet for raising her voice by calling out the police officials who tortured and killed Father and son duo in the Sathankulam town of Thoothukodi district. The main reason behind the wide attention is a video made by singer Suchithra who narrated the whole incident in English language, to make everyone in the country aware of the issue.

She has been constantly updating the status of the issue through her official twitter account. Now, Suchi, came up with a tweet slamming the Kollywood film industry for not caring for the demise of the Father and son duo. She alleged that they has only shed crocodile tears. The actress said to her followers that she will leave state if they ever try to make a movie on this issue. Suchi said that she will probably leave to Goa or Kerala.

“If Kollywood, which largely ignored the Sathankulam issue or has only shed crocodile tears so far, makes a movie about Jayaraj and Fenix, I will leave Tamil Nadu for good. Prob move to Kerala or Goa.” read Suchi’s tweet.

If Kollywood, which largely ignored the Sathankulam issue or has only shed crocodile tears so far, makes a movie about Jayaraj and Fenix, I will leave Tamil Nadu for good. Prob move to Kerala 🤔 or Goa. #JusticeforJayarajAndFenix

The Police officers tortured Jayaraj and Fenix with lathis and beaten them black and blue after stripping their clothes for no appropriate reason. Fenix’s elder sister Perisis, after seeing the bodies on the night June 24, has said “Munnadiyum Pinnadiyum onnume illa” (There was nothing left on the front and rear of the bodies) to the reporters in Tuticorin. This crime committed by the police officials grabbed nationwide attention and head constable Revathi stepped forward to be a witness against her colleagues.

A teacher named Subramaniam who caught beating, kicking a student in class room, has been suspended and ordered by the court to be lodged...

Abhirami of Bigg Boss fame responded to a question based on "smoking room" during her Instagram live session, saying that she's not a fool...