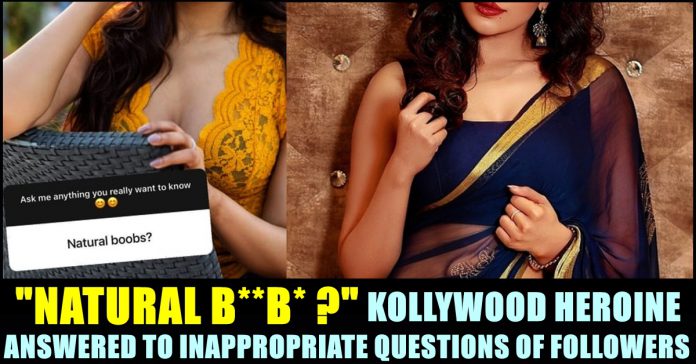 Actress Parvathi Nair who predominantly appears in Tamil and Malayalam films, recently conducted a question and answer session with her Instagram followers. She who answered as many questions as possible, didn’t lose her cool even after coming across some of the toxic questions. The actress is currently enjoying nearly a million and half followers from across the country and is pretty much active engaging her followers by uploading posts from her photo shoots.

Parvathi made her acting debut with the 2012 Malayalam film Poppins. She rose to fame among Tamil cinema’s mainstream audience after acting in Ajith kumar’s “Ennai Arinthaal” as one of the female leads. She paired opposite to Arun Vijay who played the role of an antagonist in the film. She did notable roles in some of the other Tamil films including “Uthama Villain”, “Maalai Nerathu Mayakkam”, “Koditta Idangalai Nirappuga” etc.

On Friday, she conducted a question and answer session with her Instagram followers. Most of them asked her about what kind of guy she would prefer to marry and some of them expressed their love towards her. Among the many, a user had the courage to question about the actress’s body measurement. Without losing her nerves, Parvati replied mentioning the size of her shoe and dress by adding a laughing emoji.

Another user wanted to know whether actress’s upper part of the body is natural or artificial and questioned about it. The actress replied to him saying “Yes” and added an emoji with rolling eyes.

Here’s the screen shot of the Instagram story added by the actress :

When someone asked whether she would marry a Tamil guy, Parvati said “Why not ? I marry when I find unconditional love and where he is from won’t matter”

Someone asked whether she is comfortable with a swim suit. Here’s how the actress replied :

Replying to someone who asked why she added caste identity in her name, the actress said “For me, Parvati Nair is and will be my name. I give zero importance to caste :)”

Days after a video of a youth losing conscious while playing a Kabaddi game sent shock wavs among the public, now one more Kabaddi...

Pakistan Fan Insulted Ashwin On His Birthday !! Check How The Cricketer Handled

Chennai based Indian bowling all rounder Ravichandran Ashwin celebrating his 34th birthday on 17th of September. When the entire cricketing fraternity is wishing him...