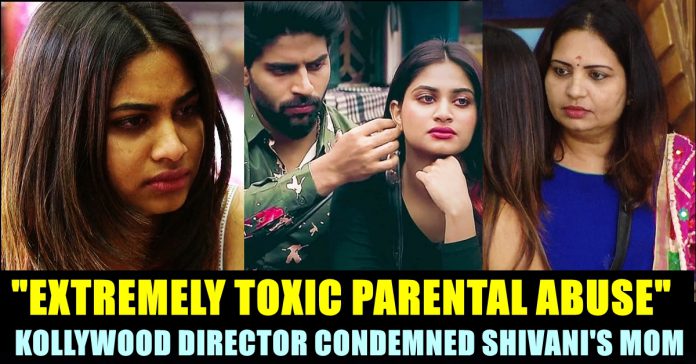 The most popular freeze task in Bigg Boss Tamil started on Tuesday and left the viewers of it in utter shock as Shivani’s mother entered the house and severely condemned her daughter for flirting with Balaji Murugadoss without playing a game on her own. The episode grabbed special attention from the viewers of the cash-rich show and reactions are pouring from all the directions of social media platforms.

Shivani Narayanan, the young Internet sensation who made youngsters go gaga through her ultra glamorous photoshoots in Instagram, entered Bigg Boss house as a participant. Since her entry, the TV actress didn’t involve in any kind of activities and restrained herself from arguing with her co-contestants during tasks. However, she spent most of her time in the house with Balaji Murugadoss, a co-contestant of her who is also a model. Their combination attracted a number of viewers who started creating Instagram accounts dedicated to the duo.

Now, after entering the house, Shivani’s mother who looked emotional, questioned her why she entered the house. “Are you thinking that no one can see what you are doing in this house ?” she asked her daughter. Shivani who got puzzled, asked “What happened Maa?”

Responding to her, the mother asked whether she entered the house to roam behind a man. “Shut your mouth !! I will slap you” her face could be seen turning red. “Why are you keep following his words ? Is this your individuality ? Why are you boasting that you are being yourself ? Is roaming behind him means you are being yourself ?” she questions.

“Your Father is watching the show the relatives are watching it from our native. What would they think ??” she asks. “Why can’t you give the Christmas gift to any of the girls in this house ? What is that obsession of yours towards Balaji ?” she further questions. “I never saw you playing the game other than roaming behind him” she further said.

“You are not playing your game. You are here to get influenced and to help someone else to win the trophy. Be happy that I am not beating you up now for what you did. Have you ever asked how is your mother’s health to Bigg Boss ?? A lot of people are longing to get this platform but you are wasting it. What you did in these 85 days ?? Tell me” Shivani’s mother questioned.

“Did you think this is Jodi number one ?? This is Bigg Boss. Did you think that people will vote for you if you keep faking a cry ?? You keep crying, I am leaving. It frustrates me to see your face. Don’t ever act like this to me agai.” she left the place.

Wow wow Mom you have done great job. Amma we are proud of you to raise your concern. Hope #Shivani will realise her mistake. #BiggBossTamil4 #BiggBossTamil #BBTamilSeason4 #biggboss #Shivani pic.twitter.com/GCGeq1k1HB

Enormous number of fans are reacting to this episode in various ways. Meanwhile, a number of celebrities have also stated their opinion reagrding the same. Director C.S Amudhan who is known for directing Tamizh Padam 1 & 2, came up with a tweet condemning Shivani’s mother.

He termed the behaviour of Shivani’s mother as “Parental Abuse” and said that it is not acceptable at all. “Ok. Just happened to watch the Big Boss episode. That was clearly normalising extremely toxic parental abuse. No..No come on that’s not acceptable content at all.” his tweet read.

Ok. Just happened to watch the Big Boss episode. That was clearly normalising extremely toxic parental abuse. No..No come on that’s not acceptable content at all.

Hashtag “Shivani” is trending in the micro blogging social media site with people supporting and opposing the way Shivani’s mother treated her daughter. Have you watched the yesterday’s episode ?? Comment your views on it !!

Previous articleFollower Advised Archana’s Daughter !! Check How She Replied
Next article“We Fans Are Ready To Give One Day From Our Lifetime To Our Thalaivar” – Filmmaker

Online food delivery platform Swiggy won the hearts of public with their latest announcement on introducing a time-off policy for women struggling to work...