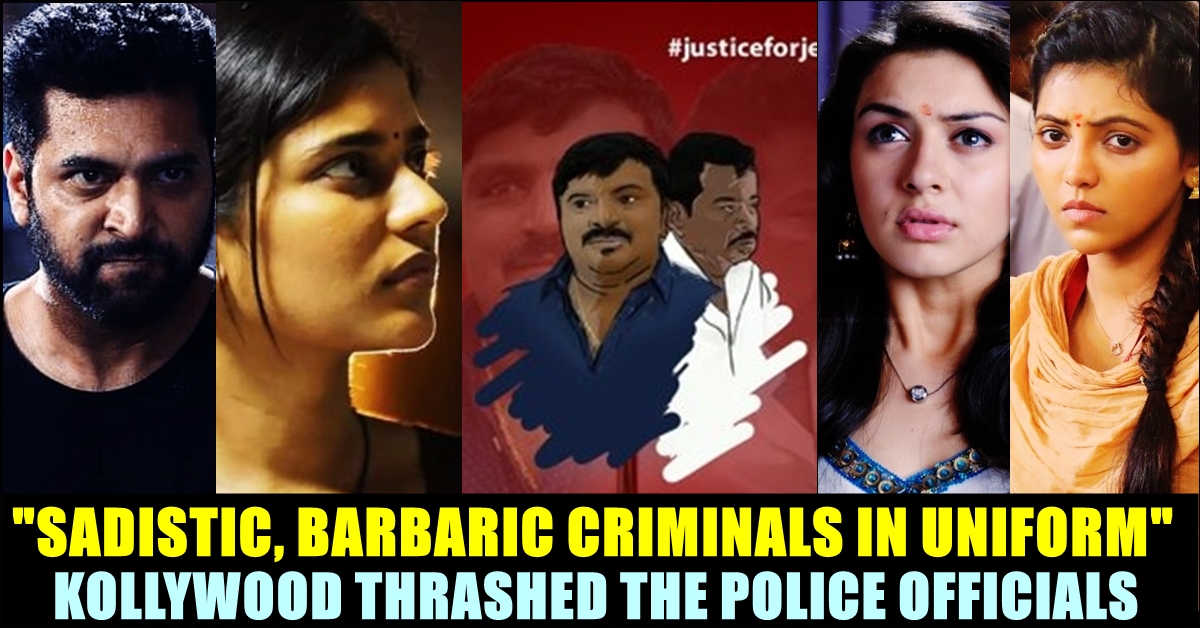 The horrific custodial death of Jayaraj and Fenix created huge outrage across the state. Days after the report on the custodial death of the father and son duo surfaced, known faces of Kollywood film industry who are having huge number of followers for their official social media accounts, started raising their voice. They are requesting public to join hands together to seek justice for the injustice took place.

What happened in Saththankulam is HORRIBLE!! Insult to Humanism… The accused officials needs to be Punished and Justice has to be given to those poor souls…. Some Humans are more dangerous than Viruses!!#JusticeForJeyarajAndFenix

#JusticeForJeyarajAndFenix No one is above the law, justice must be done for this inhuman act.

HORRIFIED to hear of the brutality inflicted upon Jeyaraj & Fenix in #Sathankulam
May they R.I.P.
This is NOT the work of Good and Honest police men who uphold Justice, Law & Order.
This is the work of a few sadistic and barbaric criminals in uniform!#JusticeForJeyarajAndFenix

Terrified to hear the brutality inflicted upon Jeyaraj and Fenix !Wat an insult these maniacs hv caused 2 our police department &country
The culprits cannot &should not get https://t.co/7YdGX9hyvG front of the law every1 is the same justice must b done #JusticeForJeyarajAndFenix

Totally inhuman💔 #JusticeForJeyarajAndFenix
Brutality faced by jeyaraj and Fenix lower middle class who lives in saathaankulam bec of police😢No one should have this much power over other lives!now it’s time to show our outrage against this culprits😢they need to be punished😢 pic.twitter.com/oXmYK9o8Ad

The brutality of these barbaric and sadistic men in uniform sends shivers down the spine.. No one should be above the law and justice must be served! They should be severely punished!! #JusticeForJeyarajAndFenix pic.twitter.com/0G1sOf6TJ4

Pity for the guilty is treason to the innocent! #JusticeForJeyarajAndFenix pic.twitter.com/k1OqwI8viT

It all started on the night of Friday when the Police personnel from the Sathankulam station, who were on patrol duty, reportedly pulled Jayaraj up for running the shop beyond the permitted time. When police attacked Jayaraj, Fenix who questioned against the police brutality against his father, got beaten by at least 5 police officials including the sub-inspector and constables” said Ravi one of his friend.

Fenix’s elder sister Perisis, after seeing the bodies on the night June 24, has said “Munnadiyum Pinnadiyum onnume illa” (There was nothing left on the front and rear of the bodies) to the reporters in Tuticorin. All the police officers of the Sathankulam station were transferred and sources reported that the police have kept Inspector Sridhar ion compulsory wait. A report on post mortem is expected today.

Family’s Attempt To Get E-Pass For Daughter’s Wedding Landed Them In Big Trouble !!
Nivetha Thomas Replied To A Follower Who Threatened Her !!