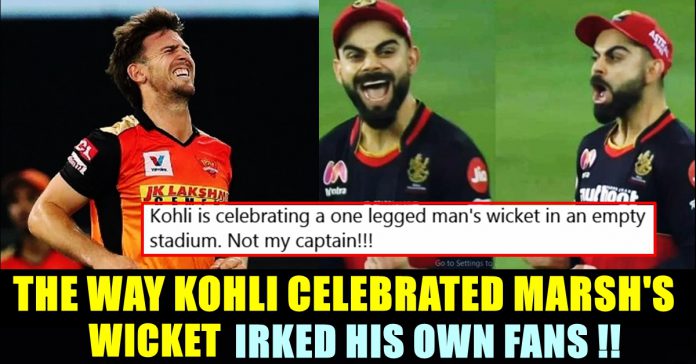 Indian captain Virat Kohli’s Royal Challengers Bangalore team registered their first win after beating Sunrisers Hyderabad in the third league match of IPL 2020. Failing to chase 164 runs from 20 overs, Sunrisers Hyderabad lost all their 10 wickets in their last over. Padikkal got RCB off to a quick start and scored his maiden half-century on his IPL debut.

SRH looked set to win during their chase, but the crucial wickets of Manish Pandey and Jonny Bairstow, both thanks to Yuzvendra Chahal, turned the tide in RCB’s favour. Chahal was the star bowler for RCB, notching some three crucial wickets. Navdeep Saini and Shivam Dube chipped in with two wickets as well, as the Virat Kohli-led team got off to a winning start. Chahal declared as the Man of the match.

One of the grievous moment of the match is when Mitchell Marsh, fast bowling all rounder of Sunrisers Hyderabad sustained an ankle injury while bowling. Marsh came on to bowl in the fifth over the Royal Challengers innings, but seemed to twist his ankle while attempting to field an Aaron Finch punch in his follow through. Though he bowled two more balls, he had to go off the field with Vijay Shankar completing the over.

Later, the visibly limping Mitchell Marsh came in to bat as 9th down after the orange team’s middle order collapsed big time. He got out in the very first ball while trying to hit a biggie to make his team get the 20+ runs that is required for the win. As soon as connecting the ball, Marsh stumbled to stand still due to the immense pain. He left the field with the help of the support staff of the Sunrisers. During the post match speech, Warner said that his X-ray report doesn’t look great.

Fans who witnessed the match on live, got extremely disappointed with the gesture of RCB captain Virat Kohli who aggressively celebrated Marsh’s wicket after taking his catch. “Kohli is celebrating a one legged man’s wicket in an empty stadium. Not my captain!!!” wrote one of a fan with many others posting similar comments.

Won't call it an impressive win for RCB as SRH played like nibba, teams like CSK, MI and KKR will crush them. Worst scenario of match was celebration by V. Kohli on dismissal of injured Mitchel Marsh. #RCBvSRH pic.twitter.com/j9jyIUf8cm

Kohli is celebrating a one legged man's wicket in an empty stadium. Not my captain!!!

So Mitch Marsh is injured and is clearly in pain and Virat Kohli celebrates his catch 😃👍🏼. Too much aggression ain’t good, No wonder they are always done in Fair play

The moment Mitchel marsh caught by virat kohli and celebration by vk is very disgusting… Instead of appreciation to MM , he is busy in his fake celebration … From indian captain such gesture should not be there #RCBvSRH @cricketaakash @irfa

RCB and Kohi are a joke, both the team and him are unnecessarily hyped up, what does it say about Kohli's sportsmanship that he celebrates dismissal of an injured player? #ViratKohli #RCBVsSRH #Marsh

Mitchell Marsh is injured.
Yet comes to bat.