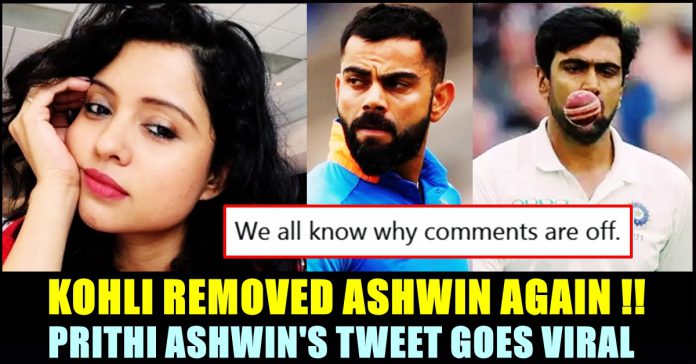 Prithi Ashwin came up with a video of one of her children looking through a binocular towards the field from the stadium of Oval and captioned it as that her child is looking for her father. Though the post doesn’t have anything to do with the exclusion of Ravichandran Ashwin from the team in the fourth test, many fans strongly believe that it is an indirect dig. The comment section of the post was turned off with quoted replies flooding the feed of the micro blogging social media site. It is notable that Prithi Ashwin had grabbed headlines in previous occasions through her funny/humorous tweets during the matches of team India and during IPL, especially when her husband plays.

The most expected fourth test between England and India started with the hosts winning the toss and letting the visitors to bat first. While announcing the playing 11, to the shock of fans, Virat Kohli said that there are just two changes for the match from the previous one. He named Umesh Yadav and Shardul Thakur as the replacements for Ishant Sharma and Mohammed Shami. The exclusion of Ravichandran Ashwin came in as a surprise to fans as he was very much expected to represent the country in the decider. Hashtags, posts, tweets and memes are trending in social media platforms, condemning the decision of Indian Captain Virat Kohli and Coach Ravi Shastri.

When he played for Surrey in July before the Test series against England, the world class spinner picked 6 wickets by conceding just 27 runs. He bagged 7 wickets in total in the only county championship game he played and the venue was Oval in London where the fourth test between team India and England is being taken place currently.

With the venue helping spinners largely, Ravichandran Ashwin who was sitting in the bench for the past three matches, was expected to be included in the playing 11. However, it didn’t go that way as Virat Kohli has backed his 4 seamers template. It is also notable that England has 4 left handers and Ashwin is known for being a nightmare with his off spin to the lefties. The surface of Oval is known for bringing the spinners into the game as it gets progressed.

Many fans and cricket experts has been expressing their disagreement over the exclusion of a man who picked 413 test wickets so far. His numbers in SENA countries has been improving since 2018 as well. “I really hope it works but I am flabbergasted that India have gone in without Ashwin again.” said cricket expert and commentator Harsha Bhogle whereas Miachel vaughan of England came up with a tweet saying that it is a “Greatest Non-Selection” he have ever witnessed.

Meanwhile, Prithi Ashwin came up with a tweet in her official twitter handle which shows one of her children looking towards the field through a binocular. “Looking for Ashwin” caption of her post read and she tagged the official handle of Ravichandran Ashwin as well.

“Epic Troll!” wrote a twitter user on seeing the comment whereas another one said “You can’t tell me that wasn’t a dig”

You can’t tell me that wasn’t a dig https://t.co/Zj5C1RINce

So there's actually a vandetta aginst him then?? Kinda proves it. https://t.co/AnztGTTsta

We all know why comments are off. https://t.co/h8E0KtKoOS

So are we.But useless morons are hellbent with egos https://t.co/WPKraQ9the

She's not alone in this! https://t.co/hZonq0YBEb

This is next level of Sarcasm😂 https://t.co/VV99l82EME

Imagine vamika doing such stuff by the next England tour 😭😭😭😭 https://t.co/Y0VFL0A68U

Previous articleBoy Accused Of Impregnating A Minor Girl !! DNA Test Saved Him!!
Next article‘Rudra Thandavam’ Of Mohan G To Get Banned?