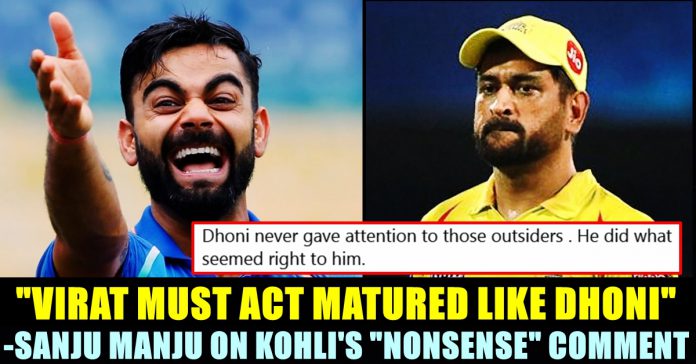 On the press conference that took place during Monday, Kohli, while replying to a question on KL Rahul’s lean patch, said that his team was not going to allow the “non sense” outside noise enter the dressing room. He further added that the Players in team India will be backed and given a good mental space.

“When an individual is going through a tough phase – it’s not like he forgets how to play, it’s just that mental clarity isn’t as good at the time – at that time if you know what things are being said and you’re being told you’re out of form, then you’re bringing in another external factor into your system,” Indian captain said to the press reporters.

“It’s a simple game: you have to watch the ball and react and hit the ball. You have to be in the moment and all this outside talk, to be very honest, is completely nonsense” he added. “From the first to the last day of my career, all this outside talk has been nonsense to me. Who says what and why about a player, what’s the motive behind it, what’s the thinking behind it, it’s better that all that remains outside because we’re not going to let it enter our system even in the future. We are going to back our players and try and give them a good mental space,” said Kohli.

Reacting to this statement of Virat, Sanjay Manjrekar, popular commentator and former Indian player came up with a statement saying that Kohli should learn the age old reality with calmness & maturity like Dhoni. He said that the public are the same who praise players when they do well.

“Outside talk which Virat calls nonsense is basically public reacting to a public performance. And it’s always been the same- Praise when you do well, critique when you don’t. Virat must learn to accept this age old reality with calmness & maturity. Just like Dhoni did.” read the tweet of Sanjay Manjrekar.

Outside talk which Virat calls nonsense is basically public reacting to a public performance. And it’s always been the same- Praise when you do well, critique when you don’t. Virat must learn to accept this age old reality with calmness & maturity. Just like Dhoni did.

Check out some of the reactions for his opinion below :

Virat has learnt to hit it where it hurts, without naming. 🤭

Question is, can everyone have the maturity & calmness of Dhoni, some people are unique, others are different.

We love the kohli who speaks his heart. We don't want him to be dhoni.

1. Virat was referring to self proclaimed pundits who always judge performances in hindsight.
2. MSD RTing Bachchan’ tweet against commentators, bashing a journalist after semi final loss in t20 world cup is still fresh in memories.

Dhoni never gave attention to those outsiders . He did what seemed right to him.

Twitter and Instagram have proved to be really weak when it comes to the security of users especially celebs these days. A number of...