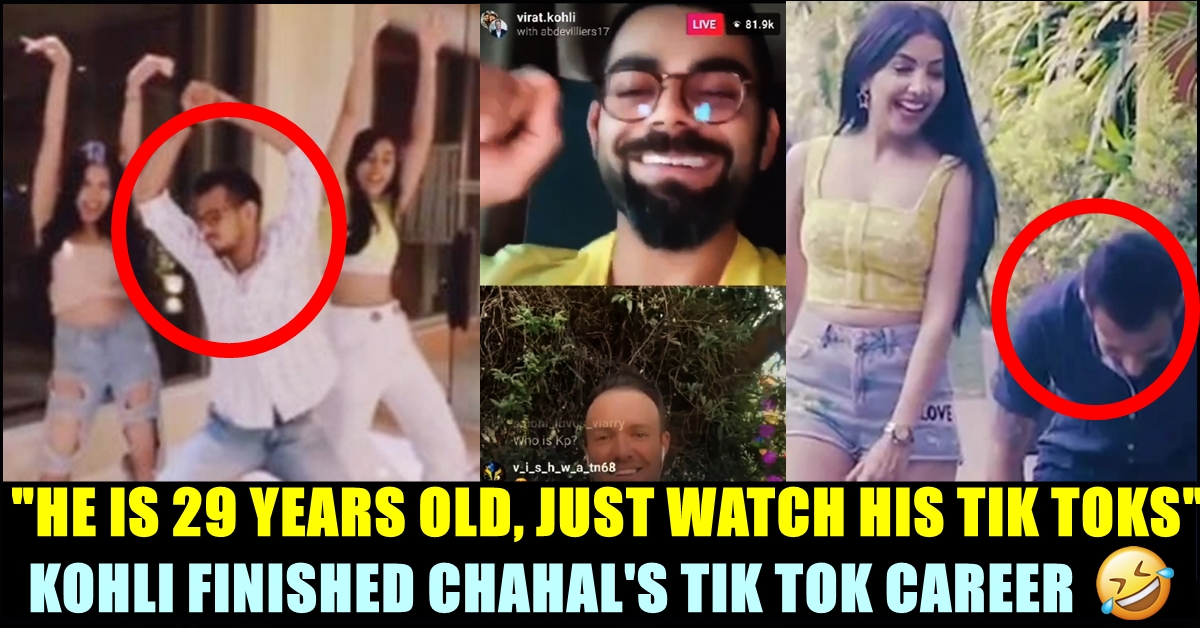 Virat Kohli and AB De Villiers interacted with each other in a live session of Instagram on Friday. A particular video clipping of their chat session is going viral in the social media platforms with hilarious caption and reactions. The video is about no one but our very own Yuzvendra Chahal, one of the most entertaining cricketer team India ever had. Yuzvendra Chahal is an Indian cricketer who represents India in both One day International and Twenty20 Internationals. He plays for Haryana in Indian domestic cricket and Royal Challengers Banglore in the Indian Premiere League. Being a leg break bowler, Chahal was mostly seen in memes rather than in fields.

Known for his hilarious onfield gestures and off field social media posts, Yuzvendra Chahal, recently joined Tik Tok and has been regularly posting his videos in it. His witty banter with his fellow cricketers in social media gained him a separate set of fans and the cricketer is regularly doing it, without considering his role for the nation. Lately, Rohit Sharma and Jasprit Bumrah, trolled him while interacting in live and now Indian skipper Kohli made some hilarious comment on his social media activities.

While interacting with South africa’s former cricketer and his Royal Challengers Bangalore’s fellow teammate in Instagram live, Kohli asked him to watch the Tik Tok videos of Chahal. ‘Have you seen his Tik Tok videos? You should go and check out Yuzvendra Chahal’s Tik Tok videos. You will not believe this guy is playing international cricket and he is 29-year-old. Just go and look at his videos. He’s an absolute clown,’ said Virat Kohli to Ab De Villiers, video of which is going extremely viral in social media platforms.

As soon as this particular clipping of the interaction surfaced, Internet users started reacting in hilarious ways. Many of them started searching for the Tik Tok videos of the leggie which is trending as an hashtag in Twitter. Check out some of their reactions below :

Just one word from kohli amd chahal is trending. His reach and connect. pic.twitter.com/RXQYDf2XEk

Comment your views on this opinion of Kohli about Chahal !!

Director Slams Chennai People For Crowding In Vegetable Markets !!
Suriya Films To Face Ban In Theatres ?? Here’s What His Fans Did !!
Advertisement