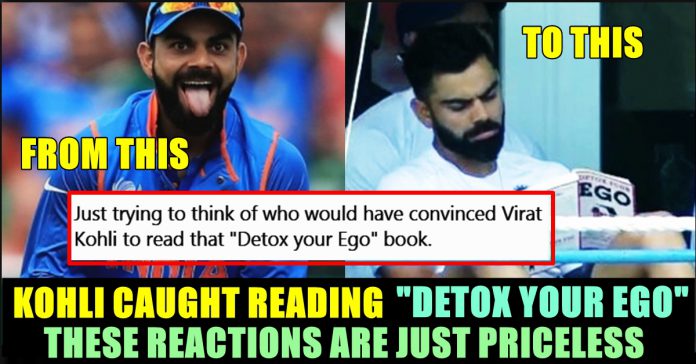 Virat Kohli might not have had the best of outings in the first innings of the ongoing opening Test between India and the West Indies at the Sir Vivian Richards Stadium, North Sound in Antigua but continues to make headlines. Despite registering a rare failure, the Indian skipper is still grabbing eyeballs, not for his cricketing exploits but for his reading choice. During India’s innings, Virat Kohli was seen reading — the book of his choice: “Detox Your Ego: Seven Easy Steps to Achieving Freedom, Happiness and Success in Your Life” by Steven Sylvester.

However, Twitter users couldn’t keep on seeing their captain reading book during match. Check out some of the reactions here :

Looks like someone gifted him the right book!#WIvIND @imVkohli pic.twitter.com/cItklD3kqd

Much needed book.. for a much needed person @imVkohli 👌🏼 pic.twitter.com/u1QNUD2cSe

Just trying to think of who would have convinced Virat Kohli to read that “Detox your Ego” book. #WIvIND #INDvWI

Fans: enough of being nice, we want aggressive Kohli back

Finally skipper Kohli has taken up to reading @DetoxYourEgo does he need it. Not the first time crixketers using this. Let’s guess why @imVkohli
Needs this book. #viratkohli #INDvWI #Ashes #Jadeja pic.twitter.com/uWTCqZCKCU

Reason why Mike Hesson was finally selected as the Coach somewhere pic.twitter.com/rPJduc1JgZ

Just trying to think of who would have convinced Virat Kohli to read that “Detox your Ego” book. #WIvIND #INDvWI

Virat Kohli was dismissed for nine in the first innings on Day 1, falling victim to West Indies pacer Shannon Gabriel.

While Gabriel lacked Kemar Roach’s persistent accuracy, his extra pace continued to challenge India’s top order and brought him the reward of Virat Kohli’s wicket when the champion batsman attempted to guide a lifting delivery through backward-point only for debutant Shamarh Brooks to take a tumbling catch at gully.

Previous articleJonty Rhodes Shuts Down A Troller Like A “BOSS” Who Mocked Him Directly !! Check Out !!
Next articleThis Contestant Got Evicted From BIGG BOSS & Refused To Stay In “Secret Room” !! SHOCKING !!

MS Dhoni Returned As Captain For India !! Fans Stunned & Celebrating To The Core !!

Team India has managed to surprise and shock everyone with their team selection for their inconsequential game against Afghanistan. Rohit Sharma and Shikhar Dhawan...