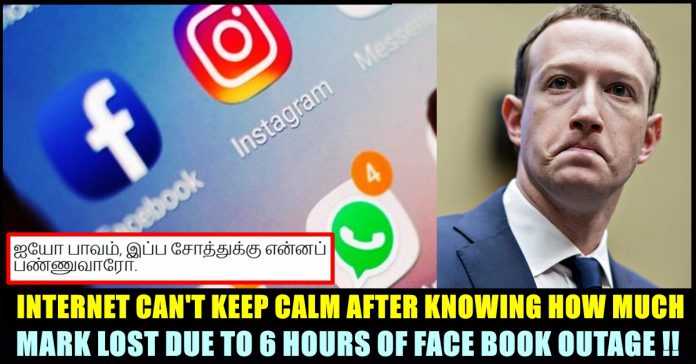 Social media giant Face book’s Chief Executive Officer Mark Zuckerberg’s personal wealth went down as he lost nearly USD 6-7 Million in a few hours after Face book, Whatsapp and Instagram suffered a global outage on Monday. In rupees, the FB CEO lost nearly 52,000 crores, according to reports. A report suggested that Zuckerberg slipped to the 5th spot in the list of billionaires after Face book stocks plunged due to the global outage. With a total wealth of USB 121.6 billion, has fallen behind bill gates, says reports.

A sell off sent the social media giant’s stock plummeting around 5 per cent on Monday, adding to a drop of about 15 per cent since mid- September. Mark lost about $19 billion of wealth since 13th of September when he was worth nearly $140 billion dollars, according to reports.

It is notable that a flurry of companies removed advertisements from Face book network after the social media giant apps like Whatsapp, Face book and Instagram suffered a major global outage on Monday. Mark, apologizing for the disruption, said that the services of Face book, Whatsapp, Instagram will be back from Tuesday. “Facebook, Instagram, WhatsApp and Messenger are coming back online now. Sorry for the disruption today — I know how much you rely on our services to stay connected with the people you care about.” his Face book post read.

Downdetector, a site that monitors the outages across the Internet, said that the Face book service outage is the largest it has ever seen. “The largest outage we have ever seen on Downdetector with over 10.6 million problem reports from all over the globe” the company said in a post on Monday.

Reactions pouring for the loss of Mark Zuckerberg in few hours. Check out some of them below :

Mark Zuckerberg lost so much money today he should change his last name to Trump.

How is that even a real number? I know people who lost $20 and it fucked their world up. But $7 bil. And he won't even lose sleep, still eats at salt Bae, and his lambo gas tank is still full

And it did not inconvenience him financially in any way.

In case you're curious about unrigging the US tax code.

If you’re focused on Mark Zuckerberg losing ~7 billion today, and forget to mention he’s still the 5th richest person in the world at ~121 billion, you’re kind of missing the point.

finding out finding out
mark zuckerberg his networth
lost $7 billion is still $121
in a few hours billion pic.twitter.com/2UeFjRP3Yv