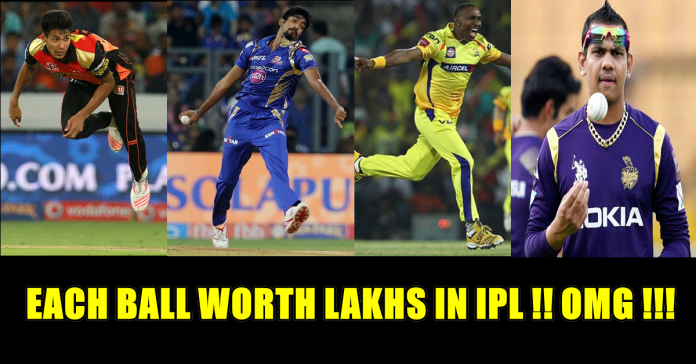 Know How Much Does One Delivery Bowled In IPL Costs? You’ll Be Shocked To Know The Amount!!

IPL is BCCI managed tournament estimated valuation almost  $6 billion. IPL is an entertainment product which charges cricket fans and viewers as per their mode of viewing mechanism. IPL has its revenue streaming from various sources. So for any ticket sales there is some form of tax that government charges,while viewers pay.Thus it is kind of consumption.Money is brought into economy. Benefiting many industries from Cricket equipment manufacturer to apparel makers(fashion designers and allied groups).Even printing a ticket has given a thrust to printing industry.Recall big banners in all over India. DTH subscription goes up.
In any form some tax is paid-profit earned-consumption occur.It brings dormant or idle money which otherwise would not have been spent,into Indian economy and thus add spices to those two Summer months.

The eleventh season of the cash-rich league reached new standards. Especially with Star India bagging the media rights with a humongous bid, IPL has come at par with the cash-rich leagues of the world like the National Basketball Association (NBA) and the English Premier League (EPL). Not only the BCCI or the cricketers who were benefitted by the IPL which started way back in 2008 but also the Indian government gained thousands of crores from the league. The league has now become a crucial part of the Indian economy. It is frequently said that India has two extra religions: cricket and Bollywood. Both the types of entertainment draw tremendous attention and support from the public. The shrewd thing that IPL did was to join the two. It was constantly promoted as ‘cricketainment’ which helped it turn into the cricketing mammoth that it is today. Well, simplifying these figures, Star India spent almost 25 lakhs to broadcast a single ball of the cash-rich tournament. And for an over, which makes it six times to that of a single ball, a whopping 1.5 crores for every over of the tournament. These stunning figures are enough to describe the richness of BCCI and IPL. Overall, the Star India group has spent 60 crores for a single match.

Having stashed a flawless Rs 16,437.5 crores, the IPL establishment, as indicated by the BCCI’s yearly report, developed at 300% out of 2015/16. Surprisingly this figure is way more than Manchester United’s growth rate which is 204%. The IPL, in money terms, is now 0.6% of India’s Gross Domestic Product. As a brand, it’s now worth $5,500 million.

Previous articleBJP MLA Raped a Girl, After FIR Lodged Girl’s Dad Gets Killed And MLA’s Name Removed From FIR.. WTF !!
Next articleClass rooms turned into a Train!! : Check Out this Innovative Initiation From The Rajasthan Government School !!

Vishnu Vishal who is busy promoting his upcoming film "FIR", in a recent interaction with a youtube channel, has said that he will never...