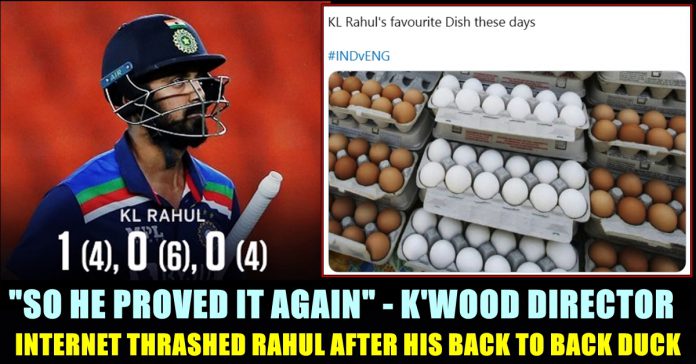 KL Rahul’s terrible form continued as he got out for a duck in the third T20 between India and England. Entire Internet came up with tweets and reactions expressing their disappointment over the right hander’s lack of concentration while playing his shots. Tamil director Venkat Prabhu who is known as an ardent fans of game cricket uploaded a tweet saying that Rahul proved it again. Many other fans who got dejected slammed the cricketer through their social media posts.

KL Rahul got out for duck for the second consecutive time in the series and the cricketer who got an opportunity to play all the three t20 matches, scored just 1 run in the series so far. He got out in a ball bowled by Mark Wood and didn’t read the pace well. He tried to work the ball from outside off towards the on-side, and the shot selection is being heavily criticized by the cricket fans. The ball was bowled at a speed of 146 KMPH.

“KL Rahul should be out as he is not in form and Surya Kumar Yadav should be in for playing 11.He did not bat in last match. But Rahul on another hand is not utilizing the chances. Surya should open the innings in the next match” said a follower out of frustration whereas director Venkat Prabhu said “So rahul proved it again ….. #TeamIndia”

So rahul proved it again ….. #TeamIndia 😷

@BCCI KL Rahul should be out as he is not in form and Surya Kumar Yadav should be in for playing 11.He did not bat in last match.But Rahul on another hand is not utilizing the chances.Surya should open the inings in the next matxh

Not Surprised That #KLRahul Failed In #NarendraModiCricketStadium
How can Name like Rahul perform in Narendra Modi stadium?😄😄#INDvENG

KL Rahul has made 1 run in 15 balls in three T20 matches for India. Thats less than 1 run every two overs. Why is @imVkohli peristing with him? #KLRahul #IndvsEng

There is no difference in the number of runs I'll score if I play for India and what KL Rahul is scoring these days.#INDvENG

Kl rahul's last 4 t20 scores are 0 1 0 0 still he won't be dropped bcoz ….. All knows….. Ishan kishan young boy who have scored fifty on his debut has to play at unfamiliar spot in his just second match …that much uncertainty due to only one player who is close to the cap.

Even with Jadeja & Bumrah available, India will still find a way to fuck up team selection.

My mom has a better strike rate striking me than KL Rahul has, striking the ball in this series.#INDvENG #INDvsENG #IndiavsEnglandT20Series

However, a number of fans are hoping for the come back of the cricketer and believed that it is just a bad phase for him. Comment your views on these reactions on KL Rahul’s batting display !!

Memes and posts trolling the readers of Kalki's Ponniyin Selvan" who has been pointing out the flaws and corrections in the film's promotional videos...