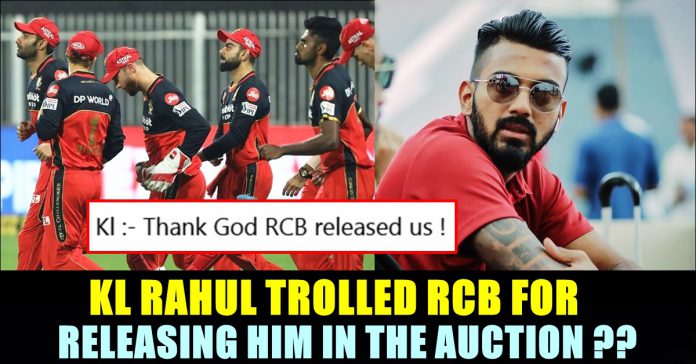 A tweet posted by KL Rahul in his official social media handles is highly believed to be a tweet targeted on team Royal Challengers Bangalore by his followers. The timing of the tweet made many of the twitter users to speculate that he is trolling the team after it got eliminated from the IPL tournament.

On 6th of November, RCB lost the eliminator against Sunrisers Hyderabad and got out of the tournament after posting just 131 runs in the first innings. On the very next day, KL Rahul came up with a post asking “Jokes on who?” to his followers. In the picture we could see himself and Mayank Agarwal laughing hard.

Knowing the fact that KL Rahul and Mayank Agarwal were the players released by Royal challengers Bangalore in the auction, many of the followers of Rahul said that the joke is on RCB. Check out some of their replies below :

While Rahul was playing for RCB, he skipped the 2017 edition of IPL due to a shoulder injury. Ahead of the 2018 Auctions, RCB decided not to retain the Karnataka lad. Moreover, they didn’t even use the Right To Match (RTM) card for him as Kings XI Punjab bought him for a stunning sum of INR 11 crore. They also released Mayank Agarwal who is now selected for Indian team as one of a openers.

As far as the current season is concerned, Rahul went on to score big and is currently holding the orange cup. He ended the season with 670 runs whereas Mayank also played extremely well for Punjab as an opener. It is quite unfortunate for RCB to release these two quality players which made fans to troll the team now.

It is also notable that a video of KL Rahul and Karun Nair uttering “Ee Saala Cup Namde” after winning a match against Kolkata Knight Riders in 2018 went insanely viral in social media platforms. It is believed that the duo said it to troll RCB for releasing them in the auction. That tagline means “Cup is ours this year” and both the players had a weird smirk on their faces while saying it.

Comment your views on this tweet of the cricketer !! Whom do you think the joke is really on ??