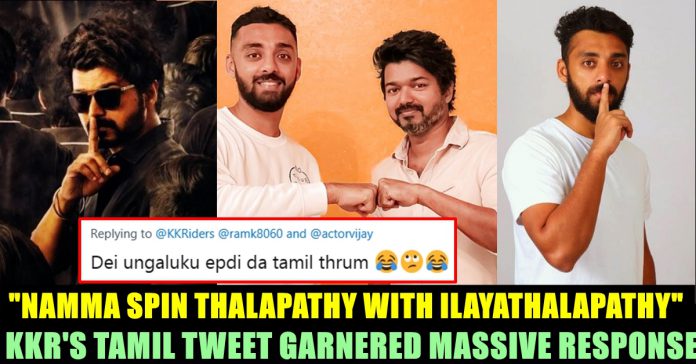 Varun Chakravarthy’s long time dream of meeting his favourite actor Vijay became true. The picture which was released by him in his official twitter account made fans to trend the hashtag “Varun Chakravarthy” nationwide. Being an ardent fan of the actor, Varun often expressed his wish of meeting Vijay in person. To show his love towards his idol, Varun wearing a tattoo of Vijay’s “Thalaivaa” poster in his arm.

“Ulla vandha powera-di, Anna yaaru?… THALAPATHY.. #vaathicoming vaathiraid #master #ThalapathyVijay” Varun wrote as his caption while sharing the picture of himself and Vijay doing a fist bump. Check out his post here :

This post of Varun Chakravarthy garnered huge reach among the fans of actor Vijay. Varun is currently playing for Kolkata Knight riders and impressed the selectors and audience by taking a fifer for his team. He rose to fame by playing matches in the TNPL league with a bowling action resembling Sri lankan spinner Ajantha Mendis. He started his cricket career as a wicket-keeper in his school days. Then turned into a medium-pacer as he grew up before quitting a high profile architect job and eventually settled with bowling spin, thanks to his knee injury.

In a recent interaction with Bosskey, Varun requested him to make an arrangement to meet the “Gilli” actor. While talking about the journey he came through all these years, Varun asked Bosskey about a scene he did with Vijay in a film called as “Youth””. After that, when Bosskey asked whether he loves movies, Varun answers by saying “I love movies. Please tell me if there is any chance to meet Vijay sir. I want to see him” he says to Bosskey who did two films with Vijay namely “Youth” and “Sivakasi”.

Surprisingly, team Kolkata Knight riders also shared the picture with a caption in Tamil. They wrote “Namma spin thalapathy with Ilayathalapathy” as their caption which made Tamil fans to go gaga over it. Check out some of their reactions below :

@KKRiders surely will be stunned by this response…

Previous article“I Will Work With You Soon” – Vijay Devarakonda After Watching “Soorarai Pottru”
Next articleTamil Actress Condemned Virat Kohli For His “No Crackers” Comment !!

Actress Samyuktha Hegde who is known among Tamil audience for acting in a film titled "Comali", gave back to one of her followers who...