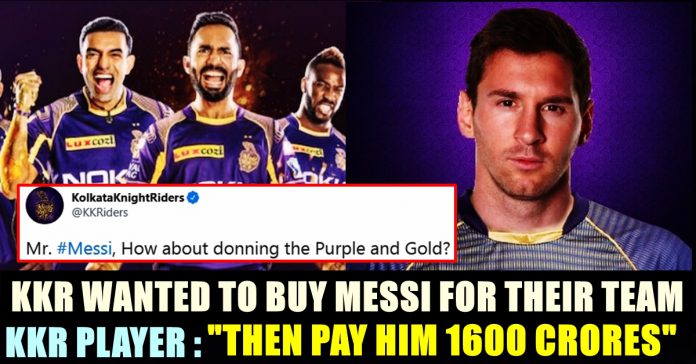 As the 13th edition of IPL tournament is nearing, all the official twitter accounts of the teams became active and posting tweets to gain the attention of the viewers. A little bit of twitter banter between the rival teams are also started taking place to entertain the fans who are eagerly waiting to see how the matches are going to take place amidst all the ruckus created by the COVID 19 virus.

To avoid the spread of the virus in the most populated India, the tournament is scheduled to take place in UAE within less than 30 days. Players of every team are reaching the country in regular interval. However, the schedule for the tournament is not released yet.

The first week of the IPL could possibly see the Australian and English players missing due to the while ball series in England. The players are expected to land in UAE during mid September. However, the official twitter accounts of the teams became super active and are posting about the activities of its players to get the fans engaged.

A post shared by Royal Challengers Bangalore (@royalchallengersbangalore) on Aug 26, 2020 at 5:30am PDT

Meanwhile, after a report on world famous footballer Lionel Messi expressed his wish on leaving Barcelona surfaced, every team in the world, including Indian football teams racing to get the legendary footballer in their team.

Our No.🔟 jersey was free last time we checked…#Messi pic.twitter.com/pVbksLjrFu

We have space for one more 🐐. Come bro, one scene we will put. @TeamMessi. #WeAreBFC

However, the most hilarious tweet to hire Lionel Messi came from Kolkata Knight Riders, one of the prominent IPL teams led by Dinesh Karthik. The cricket playing team’s official twitter account morphed Messy’s face with one of their players body and asked him to join their team by writing “Mr. #Messi, How about donning the Purple and Gold?”

Mr. #Messi, How about donning the Purple and Gold? 🤔😂 https://t.co/oplGLuxpFC pic.twitter.com/QSoJpsRsWi

This tweet from the Shah Rukh Khan’s team, gained wide reach and received hilarious reactions from the users of Twitter. Indian spinner Kuldeep Yadav’s reply stood the top as he asked the KKR management to pay $ 220 million to get his contract which is approximately 1,600 crores of Indian money.

Yadav who represents KKR in IPL trolled his own team by writing “Get ready to pay $220 million” he said by adding laughing emojis.

A report surfaced on 2018 says that Messi was earning Rs.50 every second he breathes. His current Barcelona contract is through 2020-21 and pays him over $80 million annually which is Rs.591 crores. He also has a lifelong deal with Adidas.

Fans of former Indian cricket team Virat Kohli got shattered after seeing his expression in Match 60 between Royal Challengers Bangalore and Punjab Kings....

Controversial movie reviewer Blue Satta Maaran provided two reviews for 15 long minutes for "Ponniyin Selvan". Initially, he made a review in a complete...