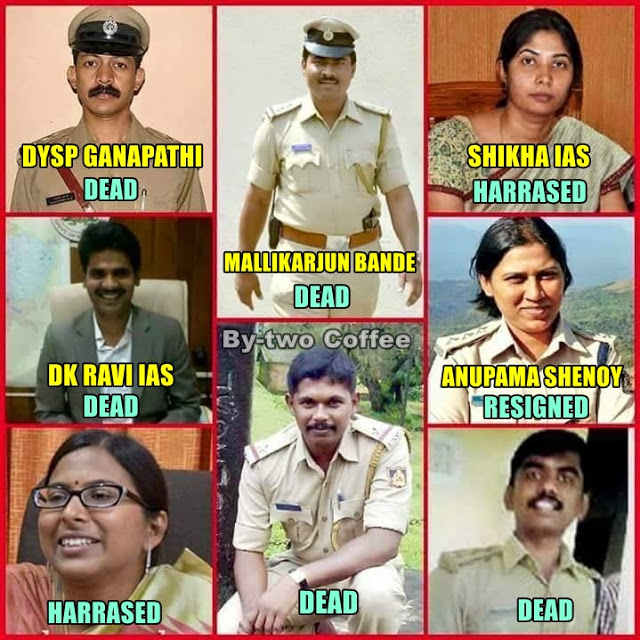 Mystery Behind The Suicide Of The Honest Govt Officials In Karnataka Exposed!

mandhara
July 10, 2016
Share
Facebook
Twitter
Pinterest
WhatsApp
Killer government ! Series of government officials
committing suicide..! and the same cycle is being followed in all the cases:
–
The officers are invariably known for
their honesty, sincerity and dedication towards their work.
–
These officers also hold the fame of
tackling complex cases and bringing the most influential culprit in front of
the eyes of law.
–
They are openly pressurized by their
higher authorities (senior officer or minister himself) to either drop the case
that they are handling or to manipulate their reports.
–
Gone to the extreme levels there are
also evidences where officers are openly threatened of suspension, losing their
job or life itself.
–
To make a man reach that level of
frustration, it is quite clear that these governmental mal-practices did
continue for a long time.
–
The final heat is felt and the officer
ends up his life – either living back a death note or dies suspiciously.
–
Media exclusively covers this and comes
up with different interpretations. And when concerned authority is questioned,
they either ignore to respond or try to twist the entire issue by personally
targeting the deceased officer.
–
Intentionally the process of recording
these death cases is delayed and witnesses are destroyed.
–
Though the case concerns important
government personnel, it is never taken to CBI. Most of the times, politicians
try to finish off the case by state controlled CID itself. Or incase, the case
is taken to CBI, as they initially depend on CID reports, they are often mislead
and CBI reports again come up more or less same as CID reports.
–
In between all this political high
drama, the personal image of the deceased officer is damaged and degraded as
much as possible. Some of the ways are:
a.       Branding
the officer as mentally and physically unstable person and preparing fake
medical certificates to prove this.
b.      Commenting
on his moral conduct often cooking up stories as to the deceased officer
possessed illegal, pre marital and extra marital affairs.
c.       Preparing
fake reports of his career by attaching him with popular scams and scandals.

No this is not a cop commercial film story. It’s the
real story of Karnataka Government. In the past three and a half years of
Congress government’s tenure, nearly 5 major officials suicide cases are
reported, 4 officers have resigned due to the harassment that they faced by
higher officials and 6 to 7 police officers have complained regarding the
pressure that they underwent by higher authorities. But those are of no use.
Politicians are still with the same attitude. Though their functions are
divided according to ministries, they still cover up each other’s guilt as a
unit. The recent reports have also said that Chief Minister of Karnataka, Shri
Siddaramaiah has openly instructed his ministers and police department to not
give any statement against any minister and few officers who answered
media’s questions were also sued and they were insisted to take permission
before facing media.

Now, entire police department is under dilemma as to
how to carry out their duties. They are literally made puppets under ministers
irrespective of to which ministry he belongs. There is constant interference of
other ministries in home affairs. The previous Home Minister KJ George was
proven his incapability to tackle several women security issues, was replaced
by G Parameshwar. It is to be noted that, even after this change, George had
considerable hold on police department. This makes the whole system all the
more fishy and the government has failed to maintain transparency. Some of the
issues that lessened the hope and faith on government are:

DK
Ravi (IAS): a very well known personality in the circle of civil servants and
local people who has contributed significantly in tracing sand mining scam.
When this bothered the agreement of local politicians and mafia heads, he was
transferred from the district of Bellary to finance department, Bangalore. He
had never stopped to give his fullest to the work. He also traced out how
reputed real estate companies and land mafias kept on cheating government
without paying tax. Thousands of crores were recovered into the treasury of
government and this marked his end.

b.
Anupama
Shenoy: Yet another brave lady officer who fought valiantly against sand mines
mafia. But unfortunately had to resign after facing hell number of transfers
and pressure by higher authority.
c.       DYSP
Ganapathi: this is an ongoing issue where an honest police officer committed suicide
by hanging himself in a lodge room after talking to media about the pathetic
conditions of police officers in Karnataka. This issue is highly politicized in
marking out the reason behind his death. His own family members statements were
twisted and wrong complaints are being filed in their name. This has created a
big menace in the state. He also holds a record of encountering notorious rowdy
sheeter Pacchi, protecting churches during 2008 church attack of Mangalore and
pacified Hindus and Christians of the region.

On 7th July 2016, around
12 noon he spoke to a news channel against two police officers and a cabinet
minister who constantly pressurized him. They were: Lokayuktha IGP Pranab
Mohanty, Intelligence Department ADGP M Prasad and former home minister KJ
George. The same day at around 8pm his body was found hanging in his room
(lodge) in Madikeri.
d.      Another
constable has come with same complaints who traced out antique pieces and gold
mafia. Disgraced by the suspension order that was issued to him, he has written
a suicide note along with the details of the case that he handled and  sent it to nine higher officers including
Prime Minister Narendra Modi, Union Home Minister, Governor of Karnataka
Vajubai Vala, Chief Minister and home minister of Karnataka.
All these developments have
horrified the entire political system of Karnataka. To conclude, Justice
Delayed is Justice Denied. There must be clear demarcation between the lines of
governance and administration. Too much of interference by the higher
authorities in each and every case must be drastically limited.
Previous articleEver Wondered Why Do We Sometimes See The Moon During Daytime
Next articleAnna University Has Come Up With A New Lame Rule.. Which Seems To BE Hilarious AF!

Internet Trolls The Youngsters Who Boasted Their Castes !!

Despite of several movements and protests against the existence of caste discrimination in India, we could still see youngsters emerging praising their caste in...