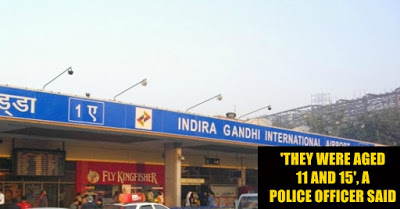 Few days back, a missing complaint was in a local police station in Imphal in Manipur few days back. The complaint stated that Two minors, aged 12 and 15 years, went missing from their home in Imphal.

But the case took an interesting turn when Two teenagers from Imphal, were apprehended from Indira Gandhi International Airport by CISF personnel late on Wednesday. According to officials, the teens ran away as they were scolded by their parents, and decided to come to Delhi to take a flight to the US. They had stolen Rs.1.94 lakhs from their grandmother’s home, without anyone’s knowledge.

Police said they were picked up after they were found wandering near the ticket counter. After two hours of questioning with the help of a translator, CISF officials found that one of the boys is a distant relative of an additional SP-rank official in Imphal. He had stolen the money from his grandmother’s house. “As per their plan, they stole the money and took a flight to Delhi, from where they were planning to go to the US,” said a source.

“The boys were questioned and it was found that they had come to Delhi from Imphal without informing their parents. The surveillance staff verified their credentials by calling up their parents. The officers found some clothes, books and around Rs 2 lakh cash from their bag,” said a senior CISF officer.

You May Get Another Chance To Exchange Your Old Notes
Demonetization Is A Hoax. It Will Not Kill Black Money.