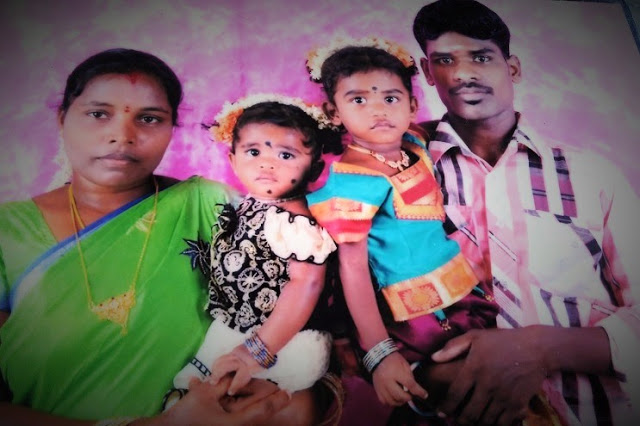 For Karunanidhi, his wife Sudha and their two children, the daily routine was to leave their children at a relative’s home at 7am and go for work. On their way back, the mid-twenties couple would pick up their kids around 6PM, buy groceries at a store in Ashtalakshmi Nagar and then return home.
On Sunday, the family of four followed the same routine. But by the time they were to be home, the couple was dead, one kid seriously injured and the other had missed death by a whisker.
“They were sitting on the bike and I turned to take the pulses they wanted. When I turned back to them, they were getting electrocuted,” says Radhalakshmi, the grocery shop owner.

An overhead power cable snapped, electrocuting Karunanidhi, his wife Sudha who was holding on to him and their 6-year old daughter Aarthisri. Radhalakshmi pushed the younger daughter Nithyasri, aged 3, who was perched on the fuel tank down with the help of a stick. Both Karunanidhi and Sudha died on the spot.
The elder daughter’s fingers have twisted inwards. She sustained injuries on her shoulder and hand. While the younger one was saved from electrocution, she too has been hospitalized as she has an existing heart condition.

Image: Six-year-old Aarthisri and three-year-old Nithyasri
Karunandhi and Sudha, both construction workers, have paid the price for the inefficiency of state’s power corporation, Tamil Nadu Generation and Distribution Corporation Limited (TANGEDCO). Speaking to The Hindu, a senior TANGEDCO official acknowledged that it was their fault, “A spot enquiry by the Executive Engineer showed that the suspended staff had failed to carry out periodic inspection and maintenance. Several electrocution-related deaths have occurred in Chennai due to rains, but this is the only incident where our staff were directly responsible for an accident.”
TANGEDCO cannot be allowed to get away citing the rains as reason for the mishap, says locals.
“This is not the first time this is happening. Ten days ago, an earth-wire fell on a four-year-old on this street. We have repeatedly complained to the electricity board. They do not take any action,” says Radhalakshmi.
“After the death of the couple, the electricity board staff came and changed the wires. Before that, they will just roll up the wires and fix it temporarily. Whenever we complained to the workers who come to fix the wires they will tell us to go and complain at the office,” she adds.
On Sunday evening, Karunanidhi’s brother Natrajan submitted complaints to both TANGEDCO and the Velachery Police Station. Four staff of TANGEDCO have been suspended by the authorities.
TANGEDCO officials claim that they had listed out the flood prone areas before the calamity, changed damaged pillar boxes and fixed overhead power lines in several areas. After the couple’s death, TANGEDCO has announced that it would take precautionary measures during rainy season and increase the size of the electricity junction boxes in Chennai city.
Meanwhile, TN CM J Jayalalithaa has announced a compensation of Rs. 4 lakh each, to be paid to the family.
The one-room kitchen house in which the couple lived in for three years remains just the way they left it on Sunday morning. Subasri, their house-owner said, “They will always travel together, one can’t ever find them alone. Karunanidhi will always carry around his children and will never keep them down.”
Sathya, Sudha’s sister said, “Both the children keep asking about their parents and we have to tell them that they have gone to remove water in their area.”
“Now, both the children will be living with me and my husband Natarajan, who is also Karunanidhi’s brother. We do not know what we are going to tell them when they ask about their mother. I can never become their mother,” she said.