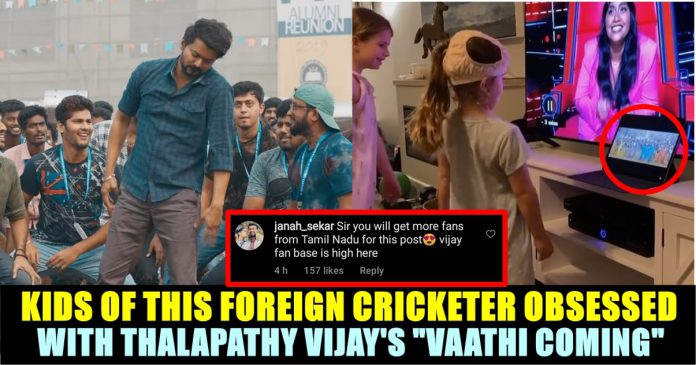 David Warner is an Australian international cricketer and he was a former captain of the Australian national cricket team. The 34-year-old, left-handed opening batsman of Australia is very much active on his Instagram page by posting pictures and videos of his cricketing career and his happy and fun time with his family members. He is living with his wife, Candice Warner and with his three daughters at Maroubra in Sydney.

David Warner’s Instagram post of two of his daughters dancing for the famous Tamil song ‘Vaati Coming’ was posted today (24-08-2021). The caption under the video says, “Literally undies on their heads hour. Obsessed by Vaathi coming song.”

Vaati Coming is the most famous song of the movie ‘Master’ featuring Thalapathy Vijay. Thalapathy Vijay is the most celebrated actor in Tamil Cinema Industry. The song has more than 247 million views on YouTube (dated 24-08-2021). Vaathi Coming is one of the few Tamil songs which crossed 200 million views on Youtube. This song is loved by all age groups of people. The song is famous for the shoulder moves steps and trying out these steps been a challenge on social media a few days ago. This song was choreographed by Dinesh Kumar and it was sung by Anirudh Ravichander and Gana Balachandar.

3 weeks ago a video of David Warner himself trying out the steps of Vaathi coming gone viral. Warner danced by trying out the shoulder steps at his home in front of a television by playing the video in it.

Within few minutes of posting this cute dance video of his daughters on Instagram, it had received a very good response, especially by the Tamil people and by the fanatics of Thalapathy Vijay. Below are a few of the responses of Instagram users.

Janah Sekar commented, “Sir you will get more fans from Tamil Nadu for this post, Vijay fan base is high here”

Kangananachrani commented, “You and your family’s love towards India and Indians.”

Haran said, “ Act with our Thalapathy and dance like this in future.”

And many more comments are pouring in the comment section as users expressed their love towards the cuteness of those two kids. This video made the Tamil people have huge respect for Warner because of Thalapathy Vijay as he is the current most celebrated actor of Kollywood.

Previous article“Take a Wild Guess What This Image Is” – Chinmayi After Receiving D*ick Picture In Instagram!!
Next articleJason Samuel Accused Go-Su Of Money Laundering Again After Their Clarification !! WATCH