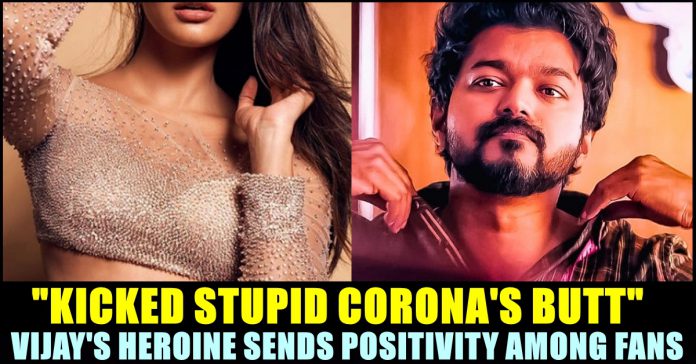 Actress Pooja Hegde who is going to pair with actor Vijay in his upcoming flick, recently announced that she got tested positive for the COVID 19 virus. On Wednesday, the actress came up with a post in her official social media handles confirming that she got recovered from the virus and the way she announced it spread positivity among the fans who were struggling to cope up with the ongoing situation. The actress said that she kicked the butt of “Stupid Covid” and advised her fans to stay safe. As soon as she made the announcement in Twitter, fans of actor Vijay started trending hashtag “Pooja Hegde” in micro blogging social media site as result of which the actress is currently trending at the top.

“HELLO EVERYONE. THIS IS TO INFORM YOU ALL THAT I HAVE TESTED POSITIVE FOR COVID-19.
FOLLOWING ALL THE PROTOCOLS I HAVE ISOLATED AND HOME QUARANTINED MY SELF. I REQUEST ALL THOSE WHOVE COME IN CONTACT WITH ME RECENTLY TO CET TESTED TOO.
THANHYOU FOR YOUR LOVE& SUPPORT IAM CURRENTLY RECUPERATING WELL. PLEASE STAY HOME, STAY SAFE & TAKE CARE” Pooja wrote in a post on 25th of April to announce about her health condition.

Pooja Hegde made her first appearance in Tamil cinema industry by acting in Mysskin-Jeeva’s “Mugamoodi” which became a box office dud. It was recently announced that the actress is making her come back to Tamil industry through Vijay’s upcoming film which is tentatively titked as “Thalapathy 65”. Fans became extremely happy on seeing the actress taking part in the film as heroine as they are going to witness a fresh pair for Thalapathy Vijay for the first time since long time.

It is notable that Pooja Hegde was in talks to pair with Vijay during “Bigil” pre production. However, Nayanthara ended up bagging the lead role. Reports also emerged saying that Pooja is going to act in Suriya-Hari’s film “Aruva”. The project got dropped and actress denied the news as well. The crew of “Thalapathy 65” completed their first schedule in Georgia lately.

On Wednesday, Pooja came up with a post saying that she got completely recovered. “Thank you for all the love ya’ll have sent my way. I have recovered well, kicked stupid corona’s butt and finally tested NEGATIVE! yeyy! All your wishes and healing energy seemed to have done it’s magic. Forever grateful Stay safe out there” her post read.

Thank you for all the love ya’ll have sent my way. I have recovered well, kicked stupid corona’s butt and finally tested NEGATIVE! 😃 yeyy! All your wishes and healing energy seemed to have done it’s magic. Forever grateful ❤️ Stay safe out there 😷🤗 pic.twitter.com/6odhfanIax

Atlee Once Again Became A Victim Of Mindless Trolls !!

Couples from all over the world posted picture with their loved ones yesterday in their respective social media accounts, in a way of celebrating...

Avan Ivan is a 2011 Tamil comedy drama film written and directed by Bala, who with this project directs his fifth feature film. The film stars...

Atlee is arguably, one of the most loved and hated filmmaker of Tamil cinema right now. Being a former assistant of Shankar, Atlee’s...