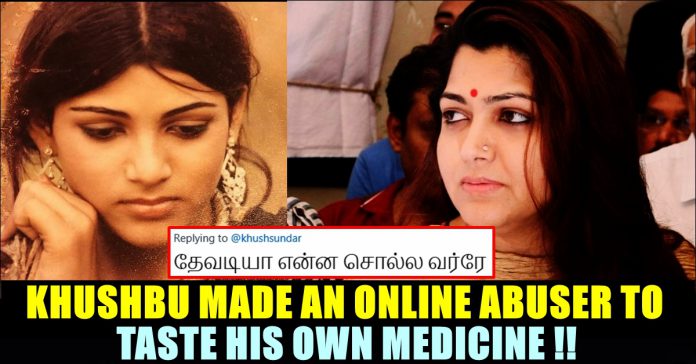 Veteran actress Khushboo who is currently acting as the secretary of small screen producers council, tried every possible way to start the shooting of serials after the lockdown got relaxed in Tamil nadu. However, her attempts failed as the government of Tamil nadu announced a complete lockdown in Chennai, Thiruvallur and Kanchipuram till June 31 due to the spread of COVID 19, a deadly virus which is causing trouble globally.

Now, in her recent interaction with Vikatan , Khushboo said that people of the state is one of the main reason for the vast spread of the virus. “Though government repeatedly informs people that the essentials will reach them without interruption, people are taking it very easy thinking that they would not get infected by the virus. No one knows whom will get infected. We all witnessed the rush in wine shops few days back. Social distancing went for a toss during those days. Problem is with people too. We have to be careful” Kushboo said in the interview. She also blamed state and central government and said that they need to be more responsible.

Apart from this, she shared her thoughts on several other issues including the shooting of TV serials. While talking about Kamal Haasan and Rajinikanth’s political career, the actress who shared screen space with both of them, said that she doesn’t wants to make any statement regarding Rajinikanth’s political career as he is yet to start a political party. About Kamal Haasan, Kushboo said that she wants him to achieve in politics. “He proved himself in parliament election. I personal see it as his success” the actress said.

Khushboo shared the link of this article in her official twitter account in which she enjoys more than 10 lakh followers. As we all know, social media is not a place where we can expect 100% of positivity. To this post, one of a twitter user named as “Scorpion”, asked “What this grandma is saying ?” to mock the “Chinnathambi” actress.

Khushboo who is known for giving back to trollers in social media platforms, immediately replied to him by writing “Kannu illadhu kobodhi.. paavam.. porandhirindhu ille paadhi le ?? Ille kezhavannukku vayasu kolaaru??” (You blind moron, are you blind by birth or it happened in between ?? Or you went blind due to old age ?”)

To this comment of Khushboo, another twitter user, abused the actress. Khushboo, to give him back, said that the word he used belongs to his mother and asked whether he was born for her or not. “Un aatha peru nalla irukku. Nee avalukku pirandhuvan dhaane??” her reply read.

Most of her followers asked the actress to avoid responding to such abusers. Known for her works in South indian films, Khushboo is also known as a producer and television presenter. Having acted in more than 200 films, Khushbu joined the Indian National Congress on 26 November 2014 after meeting with then Congress President Mrs. Sonia Gandhi, and then Vice-President Mr. Rahul Gandhi. She is currently the National Spokesperson of the INC.

This is not the first time Khushboo shutting down a social media troller as she slammed them left and right in previous occasions as well. (Also Read : Kushboo Gives Back To A Guy Who Made Irrelevant Comment On Her Post !!) Comment your views this reply from the actress !!

Previous articleA.R Rahman’s Post Disappointed The Followers Of Sushant !!
Next articleFamily’s Attempt To Get E-Pass For Daughter’s Wedding Landed Them In Big Trouble !!

A tweet uploaded by Lakshmy Ramakrishnan on 30th of October is believed by her followers to be posted against Vanitha Vijayakumar with whom she...