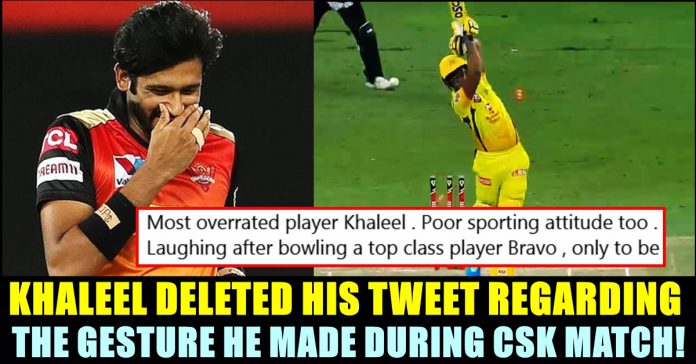 Khaleel Ahmed, a promising seam bowler who is expected to grab a special place in the national team soon, got criticized by online users for a getsure he made in a match against Chennai Super Kings after taking Dwayne Bravo’s wicket. On seeing the reactions in social media platforms, the 22 year old bowler came up with a tweet clarifying his stand.

Ahmed who made his debut in Indian cricket team in the year 2018, is currently representing Sunrisers Hyderabad team in the ongoing IPL tournament. In the 29th league match, while playing against Chennai Super Kings, Khaleel went a bit expensive and conceded 45 runs in the four overs he bowled. However he took the two crucial wickets of Ambati Rayudu and Dwayne Bravo.

Bravo who came out in the middle in the last over, was tried to go for a maximum in the very first ball he faced. Unfortunately he completely missed it and got bowled by Khaleel Ahmed. Immediately after Bravo got out, Khaleel cheekily laughed by closing his mouth with his hand.

This gesture from him, received severe criticism from the followers of IPL tournament. Considering the legacy of Bravo, followers of cricket and fans of CSK team expressed their disappointment over the youngster. Check out some of their reactions below :

Not a nice gesture from Khaleel to put out a nakkalmaxx laugh after dismissing Bravo.

Bro, you just got smoked by a 20 year old in the last game. And today, by Jaddu who had the last laugh. Learn your place.
.#CSKvsSRH #IPL2020

Most overrated player Khaleel . Poor sporting attitude too . Laughing after bowling a top class player Bravo , only to be smiled at by Jaddu with his smashing of his last over . Khaleel learn to be humble .

Khaleel such an egoistic personality 🙄🙄 First started a fight with Tewatia now laughed at The Bravo who is such a senior player..

Now, after a day, Khaleel came up with a clarification explaining that he was not laughing at Bravo. The seamer said that he was laughing for some other reason. Further Khaleel expressed his admiration towards the veteran all rounder. “I wasn’t laughing on Dj Bravo,there was some other reason,he is true legend, he is big brother to me” his tweet read.

However, he deleted the tweet now for unknown reasons. Post the match, Khaleel shared a picture of himself with former Indian captain Mahendra Singh Dhoni and wrote “It always pleasure to play against legends. we will come back stronger”

It always pleasure to play against legends 🧡💛 we will come back stronger 💪🏽 #orangearmy #SRHvsCSK #ipl2020 pic.twitter.com/7jEPJm02AX

Previous articleVijay Fans Can’t Keep Calm After Seeing This Tattoo Of A KKR Player !!
Next articleInternet Explodes On Seeing This Reaction Of Jofra Archer On Kohli’s Moves !!

On Sunday, Mark Wood and Moeen Ali of team England struck late on against India at Lord's to leave the second test heading towards...