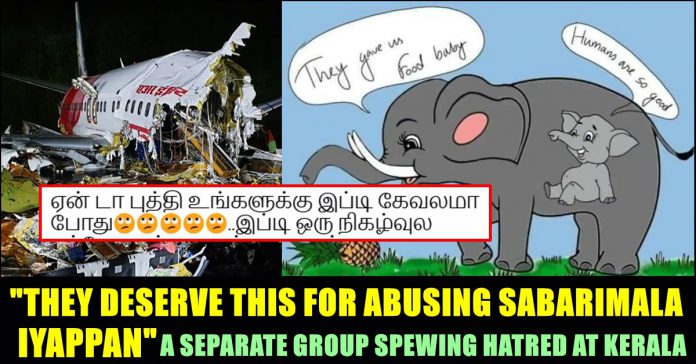 As the entire country is mourning due to the ill-fated flight crash in Kozhikode, few people in social media are looking for ways to blame the previous disastrous incidents that took place in Kerala to spew hatred on the land. One of a social media user said that the elephant that died in Kerala months ago after eating cracker stuffed pineapple finally got justice whereas another user said that it happened as the people of the state Kerala failed to respect Lord Iyappan in Sabarimala issue. These comments were captured as screenshot and being widely circulated with various kind of reactions.

At least 18 people including 2 pilots died in Kozhikode after the flight skidded. However, the four cabin crew members are afe, said Air India Express in a statement. 137 people who got injured are admitted to hospitals in Malappuram and Kozhikode, according to state government officials.

Civil aviation minister Hardeep Singh Puri on Saturday announced an interim relief of Rs. 10 lakh for the kin of each of the deceased, Rs. 2 lakh for the seriously injured and Rs.50,000 for those who sustained minor injuries. Additionally, chief minister Pinarayi Vijayan also announced a relief of Rs.10 lakh for the deceased. Two of the survived passengers in the flight have tested positive for the COVID 19, followed by which The central industrial security force directed its to go into quarantine as a precautionary measure. The Kerala Health Department urged all the passengers and those who assisted in the rescue operations to get tested and to go into quarantine to prevent the spread of the virus.

The Air India express flight skidded off the runway and fell into a 35-feet valley before splitting. Captain Deepak Sathe and his co-pilot Akhilesh Kumar were among those killed onboard the Dubai-Calicut Air India express aircraft carrying 190 passengers as part of the Vande Bharat Mission. Read : How Captain Dipak Sathe Sacrificed His Life & Save 180 Lives ??

Amidst these struggles, a group pointing fingers at Kerala people who eat beef, blaming them for disrespecting Lord Iyappan, accusing them of killing an elephant for the devastation happened. “Respect cow always. And become vegetarian” a social media user wrote as a comment. “This is the blow for Kerala communists for accusing Iyappan” another one wrote. “It is the curse of Sabarimala Iyappan” a man named as Prabhakaran wrote through his facebook account.

Here’s how netizens are reacting to these kind of hatred :

A 2019 study proved that bhakts have 60% smaller brains than average human beings. Their brain lacks essential nerve cells due to excessive gaumutra consumption.

Never ever in my lifetime have I seen such numbing hatred.

The regime, those institutions, the minds that reconfigure masses to consume such levels of hate has to go lock, stock & barrel.

It is high time for those people to realize that it is not a right time to spread hatred as it is a matter of life and death. A collective opinion on how to avoid such accidents in future is what we need to discuss in social media at this time to make India a progressive country. Let us pray for the souls to rest peace and for the the injured people to cure at the earliest.

Julie of Bigg Boss season one fame, is pretty much active in social media platforms nowadays. She who is currently participating in "Bigg Boss...