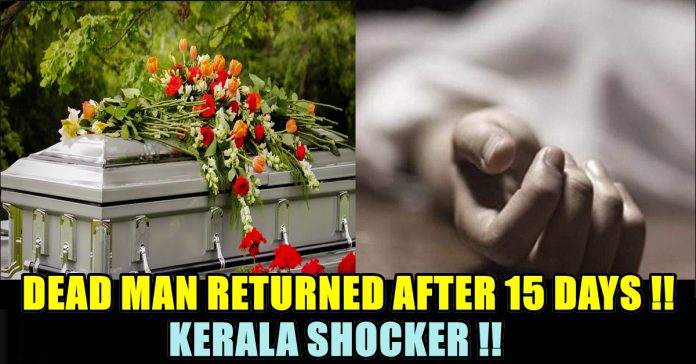 KERALA SHOCKER : Dead Man Returned After 15 Days !! Check Out The Mystery Behind !!

A 49-year-old man, presumed dead by his family, showed up much to the shock and delight of his kin, a fortnight after they performed his funeral in Wayanad, Kerala.

The family positively identified other man’s decomposed body but later it turned out to be a goof up on the family’s part.

Saji used to be away from home for days in search of odd jobs. He was not in touch with his family and friends for the last few months.

The family had wrongly identified the unclaimed body found in Karnataka to be that of his going by a similar scar, police said Friday (November 2). The body was then brought home and the final rites were performed at a cemetery on October 16.

When Saji returned home he was shocked to learn that he was believed dead and his funeral was held. Meanwhile, Karnataka Police had been informed and a probe is underway to find out the relatives of the man whose funeral was originally held in Kerala.

Previous articleAfter Instagram, Julie Asks Everyone To Follow Her On Share Chat !! Got Brutally Trolled By Her Followers !!
Next article“I Said I am Quitting & Would Return My Advance Money” Rajinikanth’s Full Speech !! Watch !!