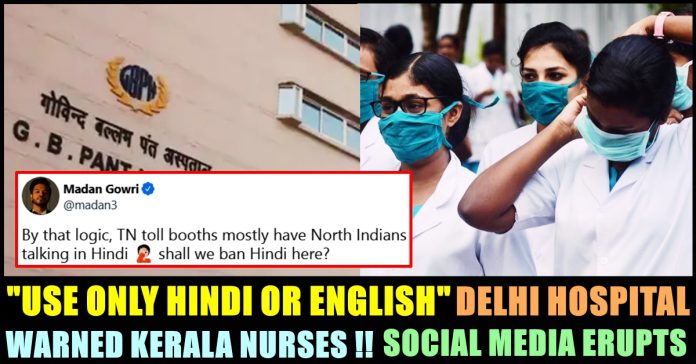 A circular of Delhi Government’s Govind Ballabh Pant Institute of Post Graduate Medical Education and Research about ordering nurses of the hospital to talk only in Hindi or English has created huge outrage in the social media platforms. The picture of the circular which is doing rounds in social media platforms warns the nurses saying that they will become a subject to serious action if they continue communicating with each other using Malayalam language.

The circular said that it causes inconvenience to the patients and colleagues of the langauage who doesn’t know the language. “A complaint has been received regarding Malayalam language is being used for communication in working places in GIPMER. Whereas maximum patient and colleagues do
not know this language and feel helpless causing a lot of inconvenience. So it is directed to all Nursing Personnel to use only Hindi and English for communication otherwise serious action will be taken.” says the circular which contains the sign of the nursing superintendent.

A Malayali nurse who is working at the institute said that a patient has raised the complaint and the order was issued by the Secretariat. “This is very wrong. Around 60% of the nursing staff are from Kerala but it’s not like any of us speak to patients in Malayalam. There are also many Manipuri and Punjabi nurses and when they talk to each other or get together, they speak in their own languages. This has never been a issue,” she said according to sources.

Meanwhile, Malayali nursing representatives from the several hospitals that is located in Delhi, has formed an “action committee” and condemned the order and reportedly planning to launch a social media campaign. Along with Shashi Tharoor, Thiruvananthapuram’s Congress MP, many other people and influential personalities has raised voice against the circular of the Delhi hospital.

“It boggles the mind that in democratic India a government institution can tell its nurses not to speak in their mother tongue to others who understand them. This is unacceptable, crude, offensive and a violation of the basic human rights of Indian citizens. A reprimand is overdue!” Shashi Tharoor’s tweet read.

It boggles the mind that in democratic India a government institution can tell its nurses not to speak in their mother tongue to others who understand them. This is unacceptable, crude,offensive and a violation of the basic human rights of Indian citizens. A reprimand is overdue! pic.twitter.com/za7Y4yYzzX

Check out some of the other reactions that surfaced in twitter regarding the circular below :

By that logic, TN toll booths mostly have North Indians talking in Hindi 🤦🏻 shall we ban Hindi here? pic.twitter.com/2heaCVayUR

Malayalee nurses cannot talk in malayalam among themselves in delhi ? What the hell.

Malayalee nurses are the backbone of the Healthcare system in many States. Asking them not to speak to each other in Malayalam is ridiculous. Can other States issue similar instructions to native Hindi speakers?

Humans always communicate with others of their native place in their native language. Getting uncomfortable when Malayali nurses speak to each other in Malayalam is ridiculous.

We live in a country where the Prime Minister mostly talks in Hindi. pic.twitter.com/T31m1hSWv9

Malayalee nurses forbidden from talking in Malayalam in North India? Don't follow the rules. Talk freely. What will they do? Fire lakhs of nurses and replace them with a ready pool of North Indian nurses – which, spoiler alert – doesn't fucking exist! Straight up disobedience now

Latest update emerged saying that MD of the hospital has withdrawn the bizarre order of insisting nurses speak only in English and Hindi. “The controversial order asking nurses not to communicate in Malayalam stands revoked. That was a blunder by Nursing superintendent, will initiate action” clarification of the MD read.

Good to know that GB Pant hospital has withdrawn its bizarre order insisting nurses speak only in English and Hindi.. nurses may speak to each other in Malayalam but they only have only one language in their work: compassion! (What would we do without nurses from Kerala!)🙏

David Warner has been winning the hearts of Indian fans since the lockdown was implemented. After doing Tik Tok videos based on Telugu songs...

TV actor Gemini Mani who is known for appearing in serials of Vijay Television such as "Office", "Eeramana Rojave", appeared in an interaction with...

This Kollywood Celebrity Says That He Would Definitely Do What Simbu Said In The Video !! Watch !!

Simbu's recent video of him requesting his fans to celebrate "Vantha Rajavathaan Varuven" release like never before is now a viral video as we all...