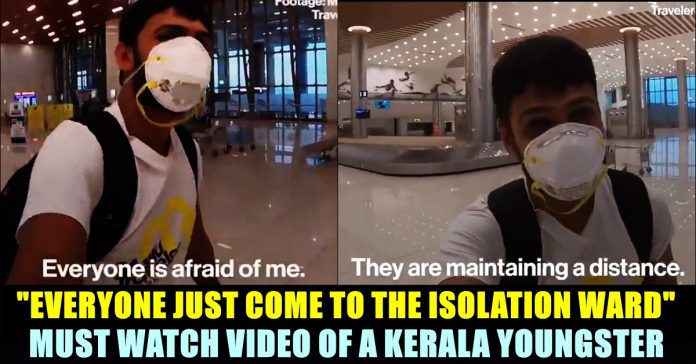 Kerala Man Made A Vlog From Corona Isolation Ward !! MUST WATCH

The threat of Coronavirus is getting severe day by day. Tamilnadu government has announced a shut down for malls, schools, amusement parks, theatres and every other important firms which requires crowd gatherings in a daily basis. This order of Chief Minister Edappadi Pazhaniswamy comes into effect from the midnight of 17th March as per the official statement released on Monday. The list of places which are asked to down the shutter till March 31 includes, The Tamilnadu Legislative Assembly and all the Anganwadi centers.

The effect of Coronavirus across the globe is threatening as the death poll is raising in daily manner. In India, many cases in different states were reported and the remedies are being taken against the deadly virus. The first cases in India were reported in Kerala first. The only way to stop the disease from spreading is by visiting the hospital and testing for it as soon as the symptoms of the disease is evident in an individual’s body.

Coughs, Fever and breathing difficulties are the initial symptoms for the disease which can cause pneumonia according to reports. In severe cases, there can be organ failures. Recovery depends on the strength of the immunity system and many of those who have died were already in poor health. Now a vlogger from Kerala, has made a video to make people aware of the importance of getting checked by the doctors and being in the isolation ward till the reports regarding the result’s arrival.

Named as Shakir Suban, the Kerala based citizen is known as “Mallu Traveler” on youtube. His video shows himself getting admitted in the isolation ward to make sure that no such virus as Corona attacked his body. The video is going viral across the Internet as he explained people how important it is to tell the truth to the doctors. He showed what life is like in an isolation ward.

“I reached Iran on January 28 and was in the country till February 16. a period when reports about the virus were rife there. Throughout my trip I have been wearing gloves, jacket and helmet. But I travelled many places in Iran where, it later turned out, many cases of coronavirus were reported” the vlogger said. After coming across many news about the virus, Shakir decided to come home.

On March 5 Shakir tried to isolate himself as he sensed having cold. “All the airport staffs were wearing masks and all the counters and corridors were cleared for my carriage. I felt like a VIP” he said in his Vlog with a chuckle. During his admission, Shakir continued Vlogging and explained his followers how it feels to be in there. The 30 year old’s reports came after 3 days and said he has no Coronavirus. The video shows himself embracing his children after reaching home. The state’s health minister KK Shylaja lauded this thinking of volunteering himself for isolation.

This is how Kerala is fighting Corona virus. All Malayalis must support @shailajateacher and our health department and we'll surely defeat Corona. Just like we defeated deadly Nipah #COVID2019

Dale Steyn Sought Apologies After Getting Roasted By Fans !!

A statement made by South African pacer Dale Steyn about IPL tournament landed him big trouble as the cricketer was forced to post a...