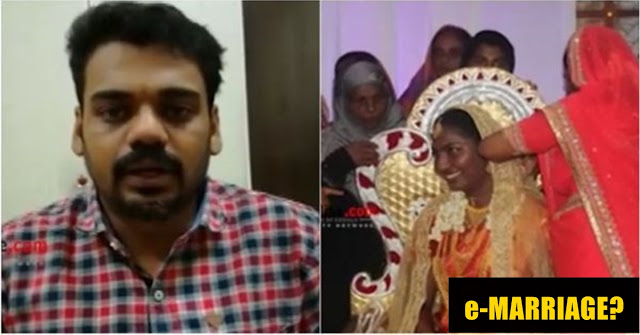 Marriage holds a great significance in each and every one’s life. Particularly in Indian
tradition and culture, marriage is given great importance and value. The youngsters today as
well as the parents in particular, want the marriages to be extra special. Well, over obsession
lead to the practice of dowry, but apart from that, people invest their life time’s earnings in this
and cherish this joyous occasion. Some even consider this a matter of reputation in our
country.

This festive occasion is enjoyed with relatives, friends and obviously the soul mate with
whom you’re about to spend the rest of your life, even your after life with. On the contrary, maybe on the pretex of thinking outside the box or in the attempt to do something unique, an NRI got married,in an unusual or rather in a weird manner that has been storming the social medias recently

A man heard his wedding bells, well hypothetically or even virtually, in a very
unsophisticated and weird manner . A Malayalam news website Kairali News
Online reported that Harris hailing form kollam, kerala who had been committed or
apparently married to his work in Saudi ,was in a deadlock position since and had to
watch his own marriage ceremony live on the Internet.

Harris was very much occupied with his work and due to his professional obligation ,
he wasn’t allowed to take leave for his marriage which resulted in this hi-tech
ceremony. With him virtually present, his sister filled the void of groom tying the knot.

Such events are quite common in muslim marriages,nikah, that has happened over
phone or photo,but its acceptance amongst hindu community is a question mark.
Harris works in a private firm as marketing manager in Saudi Arabia, whereas
Shamla Makkayil, the bride is employed as a nurse in a govt. hospital. This unique
marriage ceremony was attended by families and friends of both the parties alike.

Despite the prior scheduling, he preferred to get it done rather procrastinating which
might be occurring repeatedly because of the simple fact that, there is no job
assurance in middle east and the fear of being fired or suspended is something that
the Non residents are careful of. It is also to be noted that many keralites hail from to
the the gulf or middle eastern regions